Sympathy for the Devilish 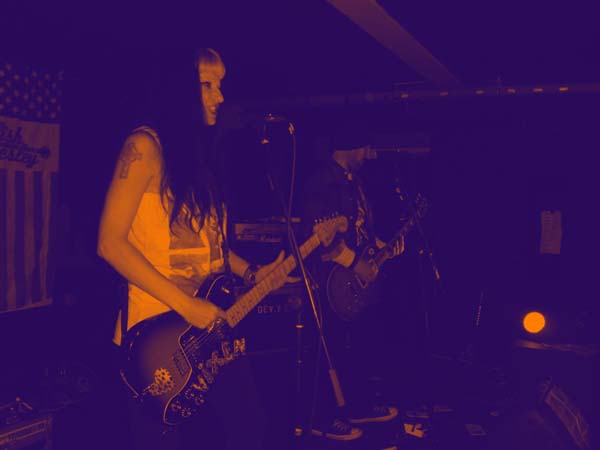 From Antiworld to, well, Devilish Presley, goth rockabilly bands sound traditionally "less" on record (maybe cause they have nothing to do with tradition...). Studio recording seems to flatten the very soul of their music - which is much closer to naughty kids going wild than fettered adults keeping up with recording schedules. Even when they self-release all five of their albums, which is what those last ones are about.
These sonic hell-raisers set up camp for the night at the Pipeline, just steps off Liverpool St station. They littered the floor with fistfulls of fake pound notes (soft as napkins), they rose the American-inspired DP flag at the back of the stage and they opened their arms to "friends and family" - who, according to vocalist/guitarist Johnny Navarro's opening statement, built their small (but respectable) 10th anniversary audience. 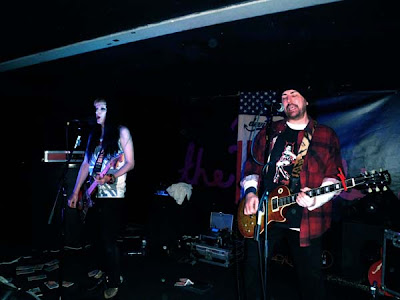 Over the years they have supported masters of the noisy dark trade, The Damned, The Misfits and Meteors and, make no mistake, they have toured to much bigger crowds. Yet, they remain a rather overlooked rock pair. Maybe it's those darn (and indispensable) recordings, which won them critical acclaim, but still don't do them justice; or the fact that subgenres like goth rock have to fall in synch with the latest fashions to see the occasional light of bigger masses. We have come to a point where some of London's most influential, trademark cultures are consistently snobbed by the music crowds (and I doubt that music has anything to do with it).

Back to what really matters, Devilish Presley's music rocks.
The moment the duo grab their guitars, their sound explodes. It's sexy and ferocious and it could never fit in four studio walls. From The Devil Rock & Roll (out of their 5th album The Dark Triad) to Black Leather Jesus (from their 2003 debut Rust Garden), this is no music for the faint of heart (and that's the way we like it). Happy As Saturday and Black Glitter - they're all great songs. Powerful both in voice and looks, Jacqui Vixen is an imposing female presence and a cool counter-balance to Navarro's restless cavorting. He's the one also making all the jokes, or maybe prophecies; like the one about their 20th anniversary: "...when only one person in this crowd will have a job and NHS won't exist". No shit...

Tunes like Hammer Horror Glamour don't quite sound like the ones that sing all the answers to our existential dramas, but this one does claim that much: "Anything is possible with rock 'n' roll. This is one monster you can't stop...".
Since rock has given answers to many of my dramas, it sure sounds wise to me.
Glitter. Hammer. Rock. And you'll roll fine...

Review and photography by Danai Molocha
Posted by DMol at 26.3.12