My own private blues burns 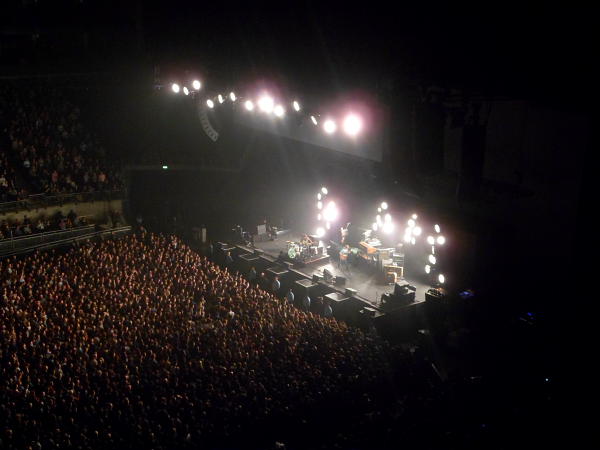 A big, impersonal arena, temple of advertising: Number 1 in the list of most inappropriate places to play for a band burning with rhythm and desire (for the blues beat). But I was there, totally incapable of escaping a Black Keys gig, my second one this year after February's Ally Pally magic.
The Maccabees, who opened, weren't half bad for one of those currently hit bands that everyone's been talking about. But nothing too exciting either.
The Black Keys though..
Kicking it off with Howlin' For You and working their way into our veins, dripping with rock'n'roll, via Next Girl, Run Right Back (what a song!), Little Black Submarines and Strange Times, the Ohio duo and their band mates got us off our seats (what is anybody doing ON a sit in a Black Keys gig, that, I'll never know) pretty much in the first few minutes. 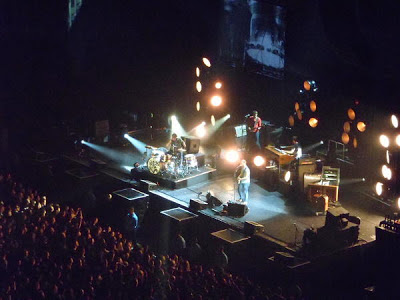 Rarely do I ever come across a band with such powerful, heartfelt musicality and disarmingly mature, knowing sexuality. The thousands of fans cheering nuts kind of felt out of place -as much as the Keys deserved it-, so utterly superfluous opposite a bunch bursting with blues lust. This is no Britney Spears. Better sweat it out dancing, I say. Music here matters more than chart-topping stars... Even though I suspect they didn't actually mind the recognition (and I loved giving it to them, just not in such a high-pitched, god-worshiping voice). And the polka-dot light-show was worth the space and the cash.
I wish I see them in a hot blues basement next, where I can dance and feel part of their electric storm, touch and mingle and sing with the crowd without over-priced beer, VIP lounges and supersized advertising killing my buzz - and my view.
I'll follow this band anywhere. But I really, really hope they don't take me back to the O2...

Review and live photography by Danai Molocha.
Posted by DMol at 27.12.12 No comments: