I can't give it up 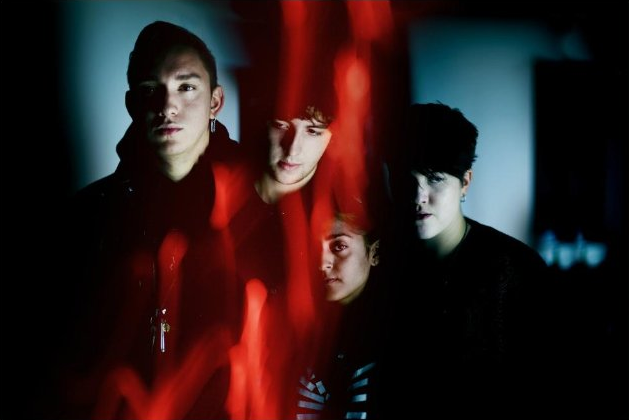 Back to the good all days at the Empire, those of sold out shows and kick-ass bands setting up on stage. After the Olympic summer indolence, Shepherd's Bush welcomed The xx.
I was first happy to be introduced live to the sounds of London rockers 2:54, who I had already spotted on the radio - but who opened at a moment when, unfortunately, I couldn't indulge in them properly.
As it turned out, it took me a while to warm up to the band in the spotlight all the same. For totally different reasons.. Opener Angels, from xx's brand new album Coexist, caught our attention with the dramatic fall of the curtain after it's first warm-up verses; but trademark sexy love beats, like Heart Skipped A Bit, seemed to surprisingly blend in - in a bad way.. As in I couldn't really feel and be swept by their presence, spot a performance that sticks out in this crowded, artfully lit space. Cause if the band has anything going for them, apart from their sneakily addictive tunes, it's the equally heady light/shadow show that accompanies the general sonic inebriation; one that makes for an almost tangible, fully-blown artwork. Meant-to-be-highlight Crystalised was played all too quickly - and though you got to admire bands who have the guts to alter their most-wanted hit on stage, the way things were going that was slightly a downer. 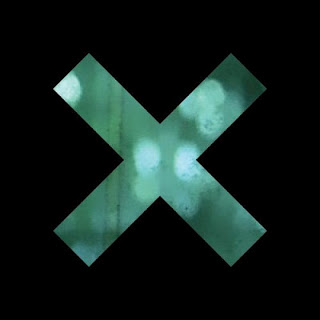 But that's when things actually started to pick up (as if, at last, they got rid of the main stress of the show). I don't know if it's just me, but I always thought the xx can take their time to get you addicted anyway. Night Time, Shelter and, above all, my personal highlight Infinity got me at last in the mood that you'd really expect from an xx show. And then, plausibly, they got off without an encore (a fan complained, but they've been getting enough applause, they don't have to push it even more).
I haven't gotten addicted to Coexist yet (though those shape-shifting colours in the related youtube videos are getting me there); I can't even say the show got me super-impressed. But to Coexist a little more time? Yes, I can definitely do that.

P.S. Was it my idea or they speak on the mic exactly like they sing? Is this for real?! As if their speaking voice would spoil the mood (he he, well, it might as well!.).
Posted by DMol at 29.9.12 No comments: 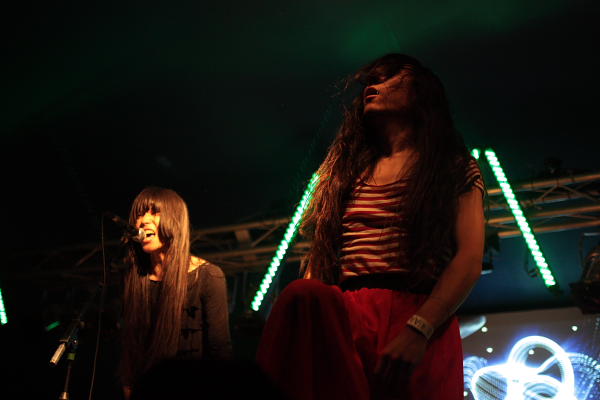 Comparing this and last year's festival at first glance, you'd immediately recognize 2012 as the year new wav-y punks / post punks got loose. More green Mohawks, less ironic mustaches, 1234 2012 was decisively more rebellious.
A tantalizing line-up of veteran and fresh-out-of-the-pop-oven bands were to blame: from Buzzcocks to Zoetrope and from Minny Pops to Los Cripis, there was always someone hollering, smacking or kicking something somewhere in the festival.
Personally, I said this year I wouldn't run crazy, struggling to catch up with the newest of the new bands. I'd make my choices and live with them. And lived I did.
As I walked in I was confronted with rock siblings Jeff the Brotherhood, in a loud warming welcome at the main stage; then I went looking for Los Cripis.
Sexy and quirky, the Argentinian trio filled the Rat Pit tent with songs like Fondue de Jesus that twirled and twisted our moods. Unfortunately they didn't last long (we soon have to start a debate on whether us, the audience, prefer a small number of festival bands, who will however have time to deploy their sound, instead of the current eternal chase of the next-next-neeext band that we never run quick enough to enjoy).
Then Gabriel Bruce came along to justify my excitement for this less populated of festivals; one with pretty good taste at such, where you never fail to discover a handful of new bands (or old ones that are new to you alone). Gabriel's dark baritone is rich in charm and Cohen/Cave style, further enhanced by a couple of glamorous girl vocalists. Look what you can come across strolling on the grass...
As for Dirty Beaches, who later took over, he just validated my already high expectations. Alex Zhang Hungtai, aka Dirty Beaches, has made a hell of an album (Bandlands) steeped in moody vintage electronica, and spiced up with despairing screams and cooky samples: Lord Knows Best, A Hundred Highways, the a-la-Suicide Speedway King, all little gems which he performed masterfully with his boys.
I went back to the Rat Pit stage to see what Zoetrope were about, and even though I just caught a minute of their last brutal song, they convinced me they're wicked.
On the other hand, The Duke Spirit, who we all keep hearing so much about, hardly stuck out. Their garage rock mix was intriguing at times, but frontwoman Liela Moss (who obviously leads the race) failed to strike a chord - despite even her vivid rock vocab.
As for Bo Ningen... Oh, Bo!
In a packed up Rough Trade Shops/Loud & Quiet stage the Japanese quartet, fans of long flowy skirts and ground-breaking psychedelic noise, found fertile ground to create havoc. Schizophrenic hymns like Korositai Kimochi drove the crowd nuts and enlivened, at last, the tent's mosh pit. Top act! But we already knew that...
As a heady Flaneur again I bumped into Deap Vally at the main stage: Rock glamazon meets Janis Joplin with a hint of Jack White, the girl duo were explosive, but not necessarily in a profound musical way...
Buzzcocks now are one of my favourite British punk bands, but of all three times I've seen them, this was the less fun. They were in form, so maybe I'll blame it on the setlist - or the fact that it was the first time I've seen them among a diverse music crowd (and a very mellow circle pit). I hardly heard any of my favs (Harmony in My Head let's say), their festival soundtrack sounding more poppy-go-happy than ever.
...So I gave them up for Minny Pops. The Dutch post punk bunch was on my to-do list for their unusual dark art wavy sounds - and, lucky me, thanks to the Buzzcocks letdown I caught them on time. Frontman extraordinaire Wally van Middendorp looked like a middle-aged cello player gone astray, walking among us sharing odd jokes (repeatedly the one about having 25 min to play 300 songs). With three decades of history and a new single coming up on Tim Burgess' OGenesis label, Minny Pops are the original post punk deal.
Twenty five minutes later, I was off to catch another seminal persona from the past - Mark Stewart of The Pop Group. Less funky music-wise than the last time I saw him, sinister as ever, Stewart and the trio VD humbly, soberly, cool-headedly just nailed it.
Finally, Denmark's Iceage wrapped up the party at the main stage - and they wrapped it up well (bows and all..). Their playing on a loop on the American independent radio has failed to convince me they're special, but on stage they didn't disappoint. The 1-2-3-4 is one big party - often truly refreshing, and occasionally a little hyped. With a touch of both, Iceage headlined alright. 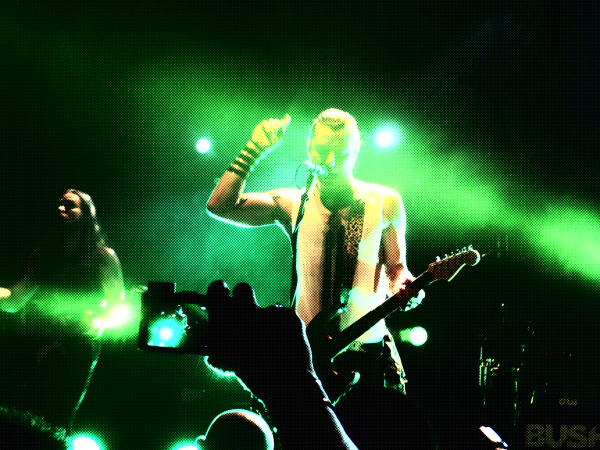 Bush caught my eye the instant they released their debut Sixteen Stone (1994), having remained one of my fav alternative/grunge outfits ever since. Regardless, that Gavin Rossdale (blazing leading man and deliciously sarcastic songwriter) is one hell of a performer.
I have to admit, the fact that in the US they've been an arena band from the start worried me. I'd get deeply disappointed if my adored old vinyl was blindly translated into pompous stage theatrics. And all these overworked veins pumping out of Rossdale's arms (think of a more slender Swarzenegger) screamed strapping rock vanity. Not cool.
But, back to what really matters, the music was good. The music was great, with minimal signs of vanity, a few arena rock theatrics and a lot of heady showmanship from Rossdale. Victory!
The Sixteen Stone hits were all there - the opening Machinehead, Little Things, Alien, Comedown and a marathon Everything (but) Zen, naturally. Swallowed, The Chemicals Between Us and Greedy Fly, from the band's consequent releases, were simply delicious. And even though I find single All My Life, from 2011's The Sea of Memories, lacks a bit of inspiration, The Sound of Winter and Afterlife (from the same album) are definitely an improvement; and Heart of the Matter decidedly bounces back to form. 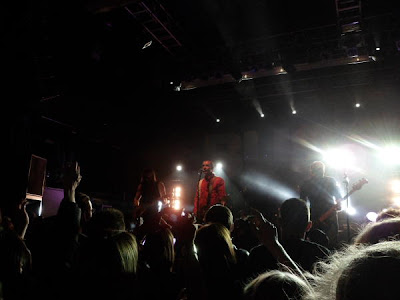 Most importantly, live they all rocked.
Rossdale laid on the bars making his guitar weep, came down by the crowd several times to mingle - but best of all, he run up to all three levels, jumping along, hugging and singing with everybody on the way, including fans in wheelchairs, who I bet don't get to do that all that often. A lot of random people got attention where they least expected it, getting high as hell.
Amazing to see - and wicked to listen to.
All in all, he genuinely seemed humbled by fan loyalty and excitement - even through his solo patch, as he confessed (this writer wasn't as loyal - I wonder if I remember any solo songs...).
Speaking of excitement, let me play it mean here and say to all those people with broken legs and sprained ankles that so selfishly took up the pit - sod off!! As much as I respect anybody's handicap, or passion for the band for that matter, there were plenty of spots with great view that you could have engaged. Don't just act at the expense of everybody else' s fun. Half the (pretty restricted in space, I might add) pit was trying not to over-enthuse, not to move, not to raise an eyebrow in case they hurt the people in crutches - at a rock gig, for Batman's sake! Quite frankly, I'd happily kick their other leg. I'm sorry my feeling wasn't shared.
Other than that weird turn of events (which in fact didn't allow us to twist or turn at all), congrats to the band.
It was truly spectacular. 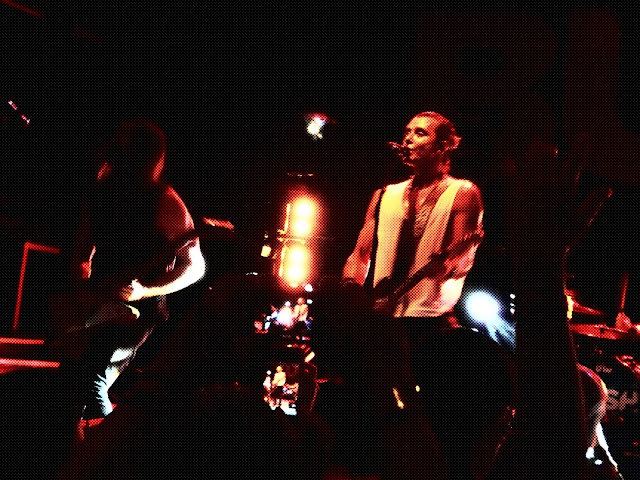