The Wandering Oud Takes the Lead 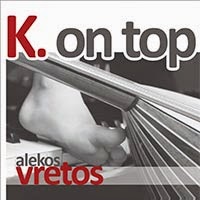 Greek oudist, pianist and composer Alekos Vretos took some time to deliver “K on Top”, the follow-up to his solo debut “Mergin’”, in a typical modern tale of recording in times of financial crisis. But when he and his ensemble finally got the chance to jam, they did it with plenty of “meraki”, a Greek word that fairly sums up the zeal and enthusiasm of everyone involved. The material includes three original compositions, a Lebanese traditional and covers of well-respected players in the world-jazz game, namely Gilad Atzmon, Anouar Brahem and Ara Dinkjian of Night Ark, lending their rhythms to the musician’s globe-trotting imagination and arrangements.

Gracefully jazzy and soothing, opener “K on Top of the Piano” evokes a time when the composer used to lullaby his son resting by the piano keys, with Brahem’s “Parfum de Gitane” and Vretos’ own spirited “Idea” soon providing a powerful awakening. The ensemble constantly seeks greener rhythmical pastures with agile piano improvisations and a variety of percussion (bendir, darbuka, daouli, riq), but the confident oud remains the leader throughout, a nomad exploring Mediterranean, Arabic and Middle-Eastern cultures. Another Vretos original, “Cactus” clocks in at over 17 minutes, wrapping up the journey with a dynamic improv that eloquently discloses the quintet’s live potential.

Friends - Treading the Streets of Brooklyn

It took me a while to catch up, but here's a cool video by the band Friends, casually giving lessons in lyrics and beat, street-chic and modern loving.