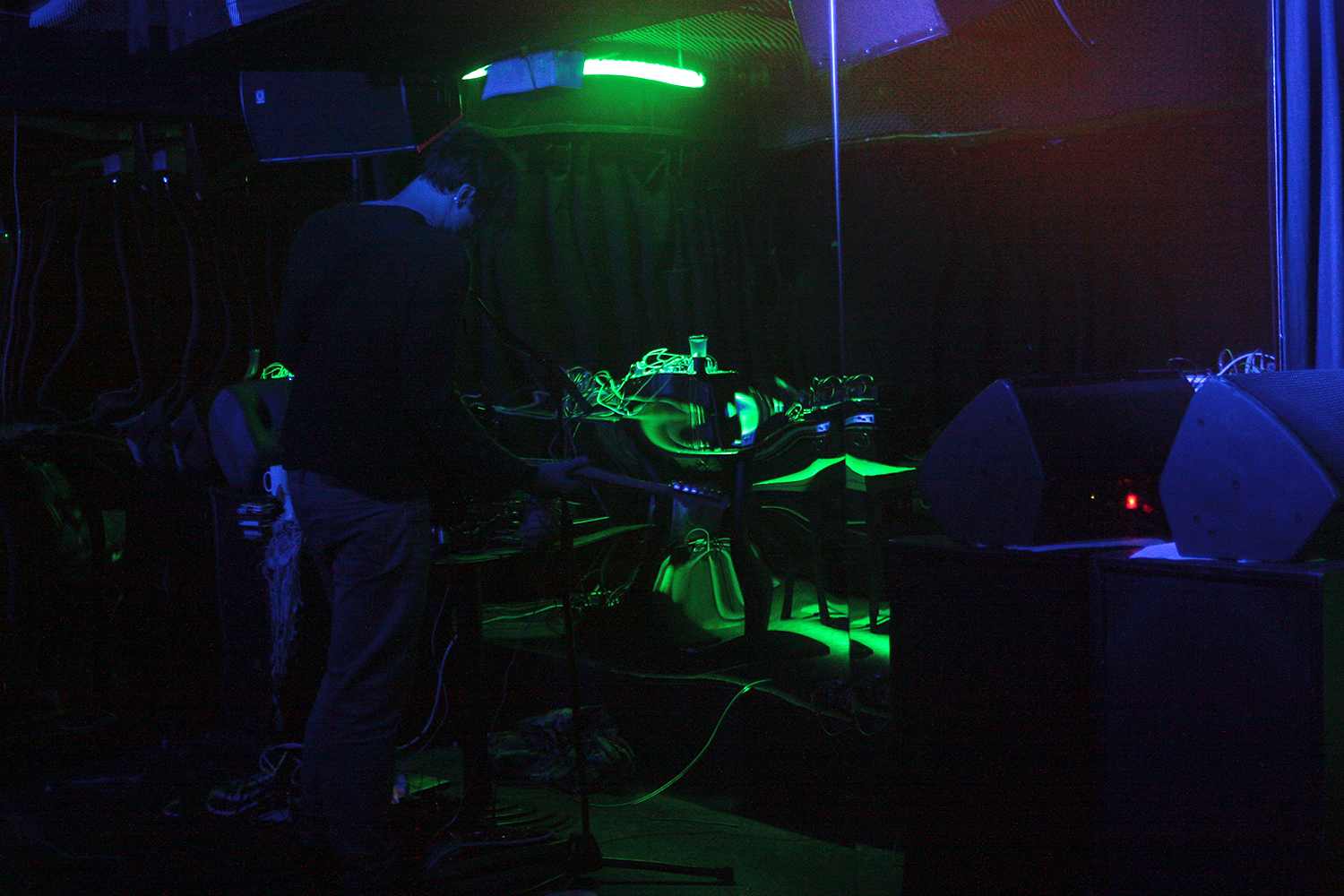 From full-blown zoomorphic nightmares to trippy found sounds and good old guitar impro, the first sonic meeting of Embarker (US) and Dead Gum (GR) in London kicked off their joint European tour with a (few) bang(s).


The Power Lunches basement opened its doors after 8 to welcome a line-up put together by Organized Music from Thessaloniki, including Kostis Kilymis (who runs the Organized Music from Thessaloniki music label) and Autotistika (aka Michael Rodham-Heaps). It was Autotistika and his variety of sonic paraphernalia who took over first, setting the tone with a spooky godlike mask and lingering loops, veering from playful childlike innocence to fully-grown rhythmical attacks. If there was any feeling of constraint in the tiny space to start with, the hypomanic drones gave this parallel mirrored universe a matching soundtrack - rendered more haunting by the mumblings of prerecorded voices.
Kostis Kilymis picked up on the repetitive electronic noise motif on his mixer, reflecting an impending urban doom with quasi-military conviction. His sober, head-on minimal approach stuck to its guns throughout, and though the set didn't seem to last long, it made its point.


It was Dead Gum, his back to the audience throughout the hole set, that made the only attempt to create something close to proper songs with his guitar, lyrics and hauntingly mesmeric visions of a riff...The word "proper" here translating to anything from troubled, antisocial feedback to humorously psychedelic recordings (the imaginary guests of the line up). Taking the freshly released GAINER on the road for the first time, he faithfully abused his trademark noise impro, this time moulding it into rather more accessible shapes and forms - and tracks like Regain and Dare quickly caught on.


Embarker (aka Michael Roy Barker) traveled from Philadelphia to join Dead Gum (aka Panagiotis Spoulos) on a tour that, after London, takes them to Utrecht, Paris, Bilbao and Athens, to name a few. Nonchalantly taking his place behind a table full of mingled spaghetti wires, he was rather inhabited by the spirit of a mad scientist attacking his mixer instead of a giant pipe organ, channeling unsettling noise on his way to absolute sovereignty. The chaotic collage (which, in Embarker's other projects, is accompanied by also chaotic or dreamy visuals) was cut through in between with inspired moments of awkward make-believe: "I'll have to come back tomorrow", he declared. He later walked down to the audience to leave us his lamp - possibly with a view to see us partake in his moments of illumination.
It was four short sets, one clear message: On this tour, you never quite know what to expect, but it'll definitely drill into your senses.


Text and photography by Danai Molocha. 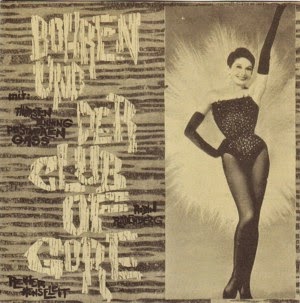 Saint John-at-Hackney is hardly the most atmospheric of holy music spots (especially in competition with the likes of the Union Chapel). But Stephen O'Malley (Sun O)))) was in place (quite late) with his guitar, ready to inject the ambiance with hypokinetic electric waves. His lingering dooming drones aptly accompanied the frustrated church-goers who, after a long wait in the delightful London drizzling, rushed in on a hunt for a couple of beers and a good viewpoint. While O'Malley expanded on our sense of menacing melancholia, those on the upper floor discovered that they were slightly cheated on the acoustics - luckily profiting, instead, on the moody rain projections dancing to the sound on the opposite wall... The tad monotonous soundscapes and projections lost their magic after a while and once everybody had rested in their places, a few of us agreeing that the set was ideal only as accompaniment music for the unsettling crowd.

Bohren und der Club of Gore later took the guitarist's spot on a colourful minimalist stage dotted with saturated lights (as opposed to O'Malley playing in the complete dark) for an evening of slow, soulful immersion, under the sounds of their characteristic saxophone, keys, bass and drums. Their highly contained moves, flawless timing and precision on their instruments instantly set the rhythm, splitting the audience between the laid back dreamers diving in with closed eyes, and the deserters quietly slipping out for a fag.

In such a slow-burning, low key sonic context, there is a fine line between inspired broodiness and sheer boredom. Unlike past attempts, their latest album Piano Nights falls under the same theory but follows a very different practice, the band rather shifting towards the latter. Painfully uneventful a lot of the time, their set was lacking the quietly building, mysterious sexual tension of 1995's Midnight Radio, sending nuances of false maturity. Clearest of all sounds was the band's well-executed control - and sobriety in slow motion can hardly ever be that exciting, or reach that far inside.

Based on the resounding enthusiastic cheers, part of the crowd apparently read a lot between the lines. But, to a lot of us, Bohren failed to give much heat to the menacing theatre of the subconscious, which could have truly made the night shoot into the sphere of a freaky slo-mo Lynchian drama.
As it was, let's just say it was more lazy dinner party, less shady jazz club.