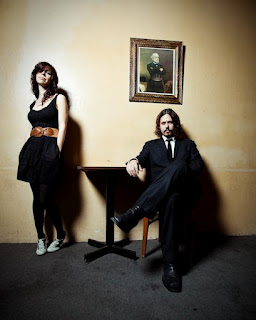 If you read the music press, or speak to your music freak buddies at-all, you know that this Tennessee boy-girl duo are, apparently, all the rage.
Having a natural allergy to hippy-folk-romantic-country harmonizing (yes, this allergy really exists), I got an instant rash just by checking them on youtube.
But I'm not one to turn my back on real talent - at least, I try. I had to give them a chance live; if anything, just to justify the rage (mine or the people's).
Their vocal harmonies are, indeed, downright charismatic. On top of that, they know how to add a little sense of humour, stretching their ooohs-and-aaahs to a point where you know they take their music, but not themselves too seriously. That alone, in my book, deserves some respect.
Hearing them on stage bears an uncanny resemblance to listening to a studio CD in state-of-the-art stereo equipment; such is the perfection of their delivery; but it's there, and it's a 100% live. In addition, their stage decor is boldly monastic. They strip your attention off the image and place it on the music, knowing they can win you over.
And in a sold out Empire, they won everybody over. With self-penned tunes from their acclaimed debut Barton Hollow, along with Jackson's Billie Jean and Cohen's Dance Me To The End of Love.
Of course, they didn't win me over... There's hardly any cure to those sonic allergies of mine, and that's the way I like it. Music is an endless war of tastes and capabilities.
But they did win the live battle. If they click with you these guys are the real deal; have no doubt.