Twenty nights, a hundred bands parading in the O2 London Piazza at no charge whatsoever was an ambitious plan and, as far as I saw at least, not a very successful one.
And it was probably that Piazza to blame... Cold, impersonal and, if it were to get busy, it would be rather for the world-famous gigs being held at the nearby O2 arena, and the mainstream chain cafés and restaurants which decorate this tacky neighbourhood. In a few words, it's not the place to be for young and talented kids with an audience that probably doesn't have much reason to "drop by" the O2 Greenwich complex.
Shame.
Planes and Sulk were surely worth it; but I was given the impression they were being made fun of, being put against an audience of five...ten people taking turns (though a few of them looked like groupies right out of Almost Famous, I must admit). In a generous space dominated by a gigantic bank ad (which I masterfully tried to avoid in my pics - and I failed), with no heart, atmosphere or sense of hanging-and-drinking camaraderie, to say the least. It certainly didn't do them a favour. 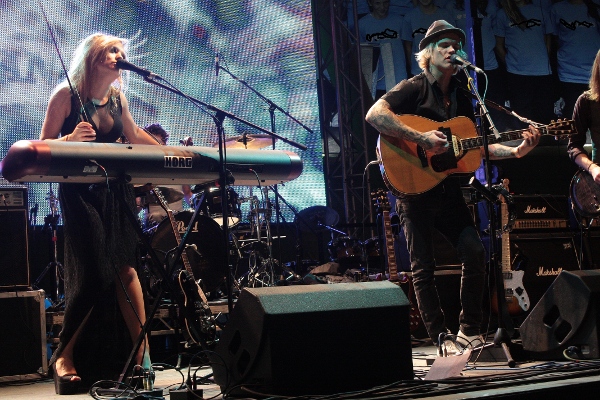 Planes are fronted in vocals and guitar by ex-Placebo drummer Steve Forrest, an obviously pro performer that leads the band through colourful rock'n'roll-blues-folk paths. And Ms Char O'Lette makes things interesting with her violin and fancy dress.
Songs like Moving On and Grinding Teeth range from beautiful to plain catchy. Still, I feel that Planes fly through diverse influences without having fully determined their character; meaning that various sound colours are not as integrated in their music as they would obviously like them to be. It's still the beginning, though, and they're definitely on a good path. 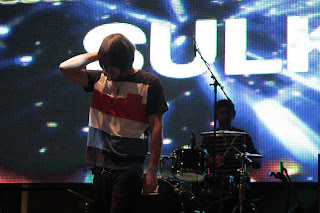 Sulk I've seen before and, from what I hear, in the meantime they've been taking steady steps toward bigger, better and more far-away things; even Texas' massive SXSW (South by Southwest) festival might take a place in their 2012 calendar.
The band holds on tight to its' euphoric, psychedelic imagery; an addictive tribute to the Roses '90s, eloquently manifested in their newest video/single Back in Bloom (and I love the cover on the 7'' vinyl it comes in). Their frontman also brought it down a notch in exhibitionism since the last time I caught them on stage.
I find Britain particularly prone to such sonic revivals at the moment; what I believe became the cause of the Stone Roses' reunion and developed from there. Sulk are set to receive increasing interest and attention, but they're revivalists that are worth it. If it's your sound, pay them a visit. They won't be short of new live ventures.

Review and photography by Danai Molocha.
Posted by DMol at 19.12.11