Music and other love potions 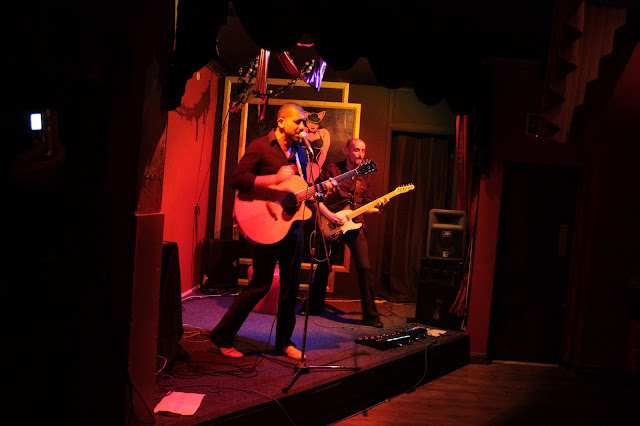 In the cabaret style ambiance of Mascara Bar there didn't seem to be a place for a nutty rock band. But as heavy red curtains opened at the far end, the first guitar strums could be heard. And two Spanish guys could be seen restlessly cavorting around the miniature stage.
Their accompanying “weird tunes from all pop eras" dominated. There was definite character in their playlist, though: a sexy '60s Rock'n'Roll feel, that songs like Love Potion Number 9 and Shape of Things to Come eloquently sum it up. The chatty Front Man introduced every tune with cheeky punch lines making the small crowd opposite him part of the London Babylon game.  The band could very well make a retro beat scene from the next sequel of Kill Bill, but they still have a long way to go. There's good music taste and energy in their show, but they're too hyperactive for their own good and at times chaotic; nothing they can't fix with a bit of focus and practice.
Posted by DMol at 25.7.11