The curse of being young and glamorous


My first live Pissed Jeans live experience was one of the funniest gigs I've ever been too.

That's why I root for the band to begin with. They give you a reason to laugh (and not just smile) when you cycle to work in the morning - from their pure irony to their downright rage, they're your weapon against a world of frustration. 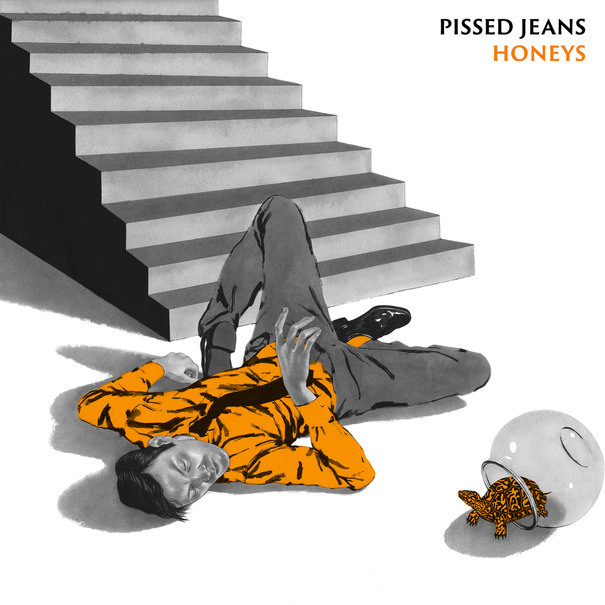 Signed on Seattle's alternative-punk-rock powerhouse Sub Pop, to begin with, they've gathered enough reviews and credibility to attract the hipsters, but they also scream and play guitar out loud enough to satisfy the headbangers literally hanging over the stage... barricades (in this case) at their gigs. Having seen my fare share of underground punk rock, Pissed Jeans are on the polished side in comparison. But still...

Dude, are they doing a good job as '80s hardcore descendants in a far more proper, more structured, cleaner, spotlight-hungry world. The band is a 100% fed by the spotlight-driven phenomenon it physically criticizes and ridicules, and their perfectly clean-cut, in appearances, lead singer just bathes himself in it before he gets helplessly down and dirty. He claims there's a policy in the Ballroom against such handsome men playing the stage - but "... Fuck that... We 're not cancelling". Of course not. He still has to get on with his shameless self-worship and break a few shirt buttons in order to generously offer an advantageous shot of his wobbly belly to the photographers in the pit.

He "indulges" the crowd by yelling... "I wouldn't even be playing here if someone hadn't told me it was Leeds" - claiming London doesn't hold a candle next to his No1 UK rock city in a series of shamelessly bitter remarks. Ruthless sarcasm dressed up as sizzling rock glamour goes on all night - and, inbetween, the Jeans bombard us with chaotic noise and speed.

Fortunately, it's noise attacks like this that help weed out the most hipster of the fans (though they're still there)... But, behind all of Pissed Jeans' cracking sense of humour, and their apparent whip-smart nonchalance, they seem a bit too concerned with the goings-on in their prevalent rock community. Four albums in (their fourth CD, Honeys, came out in February), they seem a bit more aware of their own rise to fame...They might have to spend a little more time concentrating on raising hell, and a bit less imitating NME's pretty boys to convince the true hardcore fan.

Having said that, I laughed and shook my head off that night. But I've done worse.


P.S. Just to give a thumbs-up to opening act Hookworms, who brought their own share of groovy noise-rhythms, between Jane's Addiction and Moon Duo, into the Electric lot.


Text by rocketsInsolitude, photography by Sub Pop and other quick and careless web research.