Stiv Cantarelli and The Silent Strangers @ The Apple Tree


Come down and meet the Strangers

Lighting up, both visually and sonically, an otherwise suspicious corner on Clerkenwell's Mount Pleasant, the Apple Tree pub invites us every 2nd and last Sunday of the month to Come Down & Meet the Folks. With Alan Tyler as host and general multi-tasking facilitator (I presume he's the guy cruising the main room for donations), this fortnightly music event delves deep into the dark soul of Americana, bluegrass, Apalacian, country, acoustic and folk music, educating/entertaining the lingering Sunday afternoon crowd.
After a typically vigorous warm-up by the Americana-country quintet The Lucky Strikes, Italian trio Stiv Cantarelli & The Silent Strangers (http://scandthess.bandcamp.com/) are good to go, their brand new Black Music / White Music album (out on Stovepony Records) ready to inject new sonic sparks into their show.
If you're striving to establish a connection between an Italian trio and their ties with the Americana-blues sound, the story traces back to Stiv's first band Satellite Inn (who first signed with North Carolina's MoodFood Records) and most importantly, among other American adventures, his collaboration with Portland's esteemed Richmond Fontaine. It's bands like the latter that inform Cantarelli's alternative and eclectic repertory, as well as his introspective lyrics and vocals (as for his accent, you can hardly detect it's Italian). 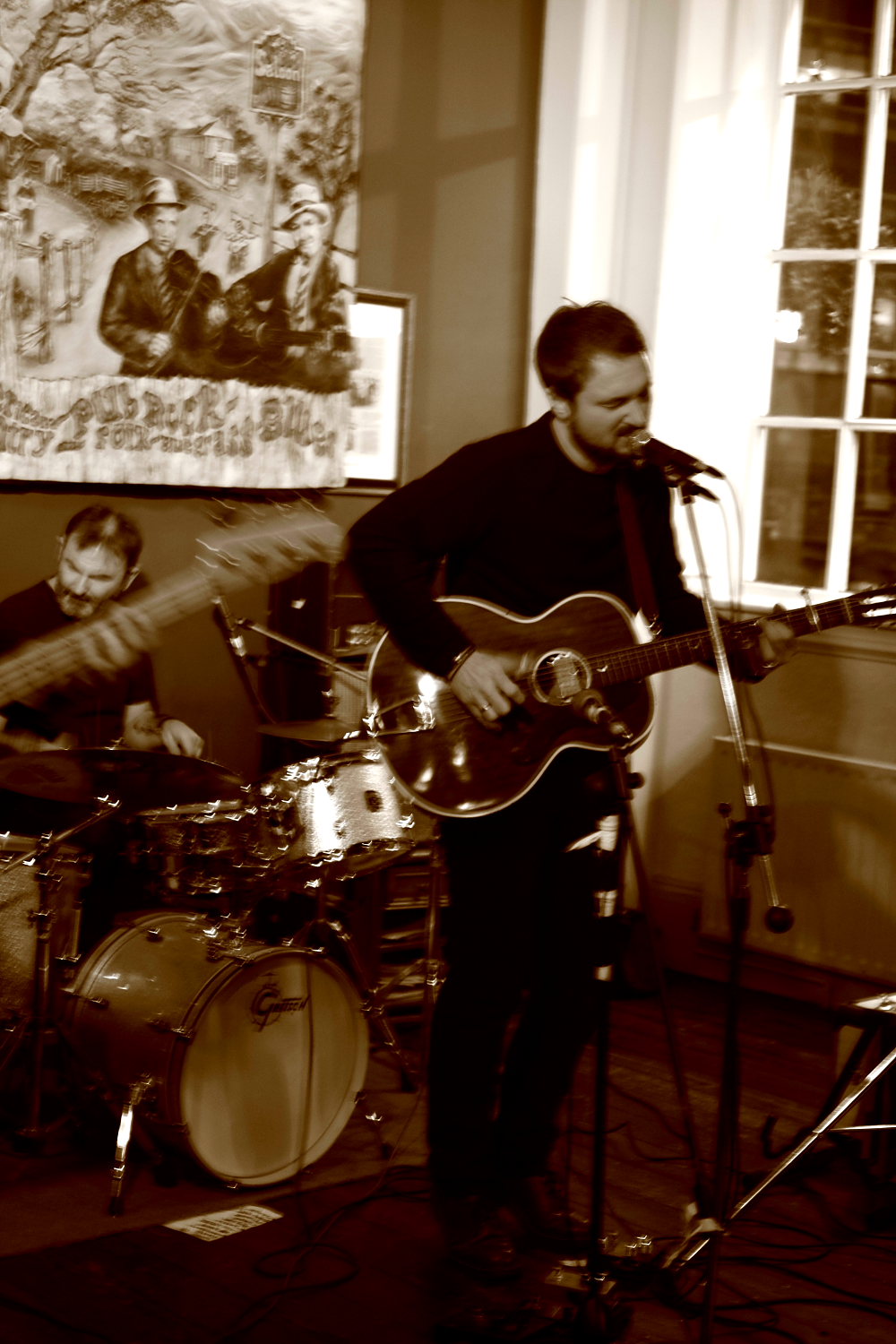 "They told us we were playing the blues. Not sure about that..." is how he introduces the band and, indeed, the sassy guitar sound and the rich histories of the folk genre often interfere with their so-called blues identity. Still, one can't deny that such heated performances run parallel to the energy-ridden shows of The Black Keys - a trademark modern blues band.
Stiv stands (jumps, and dances) between stoic bassist Fabrizio Gramellini and raging drummer Antonio Perugini, fervently delivering everything from dark and gorgeous originals (Annie, Cornerstone Blues, Captain Blues, Mahogany Jones, Under The Red Star) to famous covers (Cowgirl in the Sand by Neil Young and the Crazy Horse).
By that time the afternoon's lazy drinkers have realized they are not dealing with just another small pub band and they participate more lively, shouting songs, clapping and insisting on an encore; ultimately, convincing an exhausted but exhilarated Stiv and his backing band to come back.
The encore settled (an ironic choice of words) on extended covers by the Who (The Seeker), the Rolling Stones (Under My Thumb) and Bob Dylan (Red Line, Maggie's Farm), often unrecognizable in a collective jam. We eventually had to let them go...
That was a lazy afternoon in the pub no more.


Review and photography by Danai Molocha.
Posted by DMol at 6.3.13