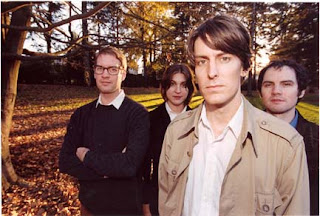 You wouldn't have thought - I wouldn't have thought, but Mr Malkmus instantly takes you away with his effortless sweetness and immediacy. And despite his lack of a certain photogenic aspect, the man is truly handsome!
With all the unmusical trivia out of the way, I can now get on with what really makes Malkmus so intriguing: The Music.
Mirror Traffic, his fifth recording stride in the post-Pavement era, contains tracks like Spazz, reminding us why we typically expect of him so much. Rhythmic and lyrical anomalies - the latter, somehow, still managing to rhyme -, excellent guitar work and a trusted sense of unorthodox, humorous blubbering.
That guitar, from time to time tends to perpetuate a dialogue between itself and the rest of its instrumental surroundings, eventually forcing your mind to quit.
But then, I thought to myself, what would be the purpose of the quintessential slacker tunes than not to keep you on your toes? It would then beat their own purpose...
Instead, you get Mr M weaving the soundtrack to your time off - even on the Koko pit. You switch off - but the music is, still, artfully and thoughtfully made.

The most annoying Mirror track I find it to be Senator; and, judging from the sudden ecstatic state guitarist Mike Clark's in, it must be their hit.
If we were to talk hits, how about Sweet's Love Is Like Oxygen, which Malkmus delivers with extra spice on that -gen? Like a pure Frenchman (!).
Another kind of hit, or better, blow, would also be that against ex-Libertine Carl Barat, the superstar who, against all other superstars (according to the band) got three of his pictures hanging on the backstage wall.
And life with the Jicks - intelligently, ironically, intricately musically goes on...
Posted by DMol at 18.11.11