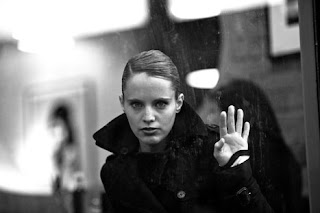 On my previous report on Calvi at Field Day, I declared my disappointment, largely thanks to the horrendous sound under a packed up festival tent.
Now at the Empire, gazing at her from a decidedly objective, devotedly musical perspective, Anna was amazing.
I am simply not a Calvi fan. Her generous femininity, what is  inescapably sung by a sumptuous letter W, is simply not my style.
Let's say I like things edgy instead of curvy.
What drew me in, were the instruments, actually having a breath of their own. Excellent instinct and timing, silence holding an equally precious part as volume - and lots of cudos to her percussionist extraordinaire (among other things) Mally Harpaz.
I try to appreciate Anna's unquestionably apt voice and I don't - as I don't like her playing dress-up flamenco style. But if that's your thing, she rocked it alright.
For a second there she dropped the vocal drama to announce coyly, like a little girl hiding behind her mother's skirt ,"you're so many!"; which, after a number of sold out gigs, I don't quite buy. She looks like quite a sweet girl, but possibly one that doesn't want to publicly follow her own fertile impact and seeks refuge in false modesty.
So be it.
Moments like Love Won't Be Leaving drumming the night away and No More Words courting us with an explicitly seductive guitar were stunning. And I'm still not an Anna Calvi fan.

"Hold me down and give me all your power.
Hold me close in every single hour".
Posted by DMol at 1.11.11