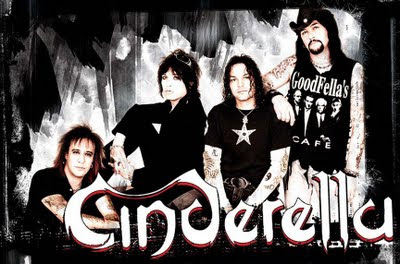 Somewhere between my passion for hardcore Black Flag, bluesy Blind Willie Johnson and avant-gardist Jani Christou hovers a weakness for Cinderella. Yes, that American glam-occasionally-turning-bluesy band that ruled the '80s and, for some dark, inexplicable reason it continues to rule my vinyl collection.
I instantly fell for them as a kid, the moment they got onstage to sing Nobody's Fool for that Music Peace Festival in Moscow 1989, playing live on my bedroom TV set and promoting the opening of the former Soviet Union to western hard rock madness.
Tom Keifer gave an excellent performance as a frontman winning my heart for good - an image he managed to maintain, beyond any expectations, at the Empire 2011 gig. Unlike the rest of the band, he was a relatively modest front-figure for any glam rock standards and, from song-writing to guitar, piano and saxophone, a gifted musician.
The band in its' whole, though, was responsible for a top notch, typically-pretentious hard rock performance including all-time classics Shake Me, Don't Know What You Got Till It's Gone, Somebody Save Me (now I know nobody will), Gypsy Road and, of course, Nobody's Fool.
Keifer's voice found it hard to keep up with the dexterous twists and growls of ballads like Long Cold Winter - and, given his continuous struggle to cure the serious problems he's faced with his vocal chords, he did an excellent job. And the guy totally rocks on saxophone.
Let me credit here the trash, yes, but wild at last fashions of trusted Cinderella fans. I might not share their flair for fringe jackets (now that I think about it, I'm not so sure...!), but rock fans have been increasingly conservative and aging in style and, well, it was a very welcome change.
If you ever feel like letting your trash glam monster out (and that's a good thing), Cinderella is the word. Oh, man!...
Posted by DMol at 14.7.11