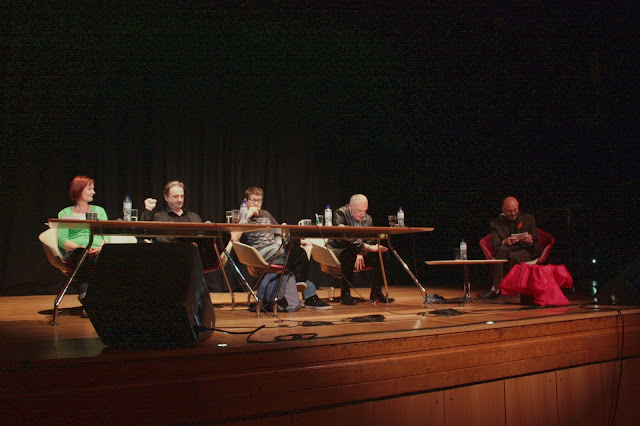 The music that opened minds

Four of Britain's most accomplished and adventurous music writers were invited by Stoke Newington Literary Festival to present their choice of ground breaking songs which inspired them to write about music.
Enigmatically refereed by Stoke Newington Librarian and past life, ex Buzzcocks-manager, Richard Boon, who beckoned his wife to play the grammy from the Gods and cast the deciding vote of HIT or MISS.

Who's My Generation, (Charles Shaar Murray ) was an undoubted HIT! And  despite it's psyched up rhythm,  reminded him of Dylan's Times They Are A-Changing. A rather awkward speaker, Simon Reynolds went for Sex Pistols-Bodies, and spoke of Punk's “evil” and its' infinite vocab of bad words.
Paul Morley felt it had made him "want to go and immediately and cut his hair”!  He then chose - Buzzcocks' Boredom – then voted it a... MISS!  A great example of “how a band's deficiencies can be a fantastic thing”,  (Simon).
Final strike, Lucy's Planet Claire. She loved how the B 52s embraced “the fluorescent side of punk”.
Despite the buzzing guitar riffs, the provocative lyrics and edgy pop attitude, Jukebox Fury failed to connect with its' audience. We wanted to see more witty interaction between the panel and hear more music! And why couldn't we have HIT/MISS cards to choose too??
They did give us food for thought.  Punk opened up minds. But what about the legacy of music press branding?