I sing because I can 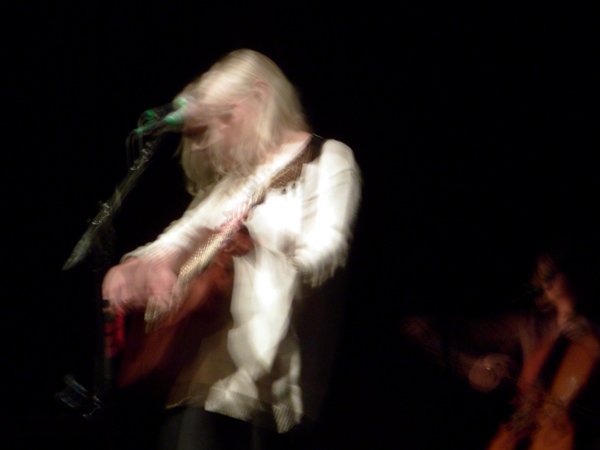 All the way up in Leeds to see Marling, currently on tour, and possibly just wrapping up her sold out London show as we speak.
To start with, first support man Pete Roe was interestingly melodic at times, but not enough as to silence the burgeoning crowd.
Solo Timber Timbre who followed, though, was more my kind of man. With the voice of a smooth gentleman and the looks of a psychotic peasant, he lead us through quirky folk ballads that were worth the applause.
And then along came Laura...
Accompanied by a full band - cello, percussion, keys, her several guitars, a banjo and a horn also making their appearance, the ensemble sounded promising before it even begun. And in epic songs like Alpha Shallows, naturally, they came in handy for a full instrumental blow.
But, truth be told, Marling & guitar have the ability to effortlessly make up for a whole band. When they left her temporarily, she more than managed on her own, with her feeling, lyrics, psyche, voice as colourful instruments in full bloom.

Gang in or out, my personal highlights included Blackberry Stone and What He Wrote; Ryan Adams cover My Winding Wheel didn't quite do it for me; I'd rather go with the new Pray For Me, which followed. The crowd cutely accompanied her in Ghosts; while the band at the back had a knack for standing out towards the second half of the songs.
I can't say I didn't find a few songs boring. A Creature I Don't Know is a fine album, but not destined for the chills that I Speak Because I Can was. It didn't help that their heroine was often distracted - whether it was her name flashing next to the Foo Fighters in an ad opposite her, or just thinking of a new joke (she and her band had a few). 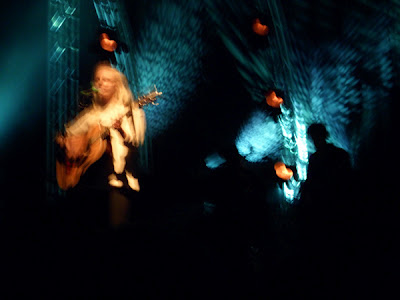 On top of all that, she said goodbye too soon with I Speak Because I Can - the song. I support her refusal to offer us an encore, but she's on her third album already! It's not like she's lacking the material to give us a bit more...
So she left me with mixed feelings, in effect. In many ways, the show was relaxed, seemingly unpretentious and slightly eccentric. Like the unassuming, tiny platinum blonde herself.
If you told me that's all there is to it, each and every time, I'd get a little worried. She could go for so much more. Or has she now become a well-disguised diva?..
If there have been better gigs, though, which I have missed, I'd have to make a 180 degree turn and say well done; for allowing herself the space to be herself. I would really want nothing more or nothing less for these songs.