From industrial Germany to spiritual Uzbekistan 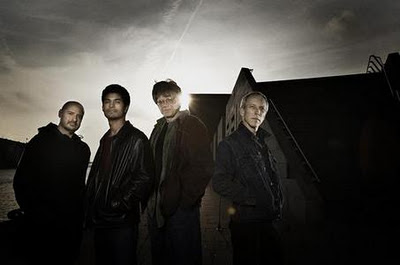 No intermission, no pause was held between us and our vast journey into lands and sounds, led by the genre-defying Kronos Quartet.
Part of the Awakenings residency, Awakening: A Musical Meditation on the Anniversary of 9/11 was build around Michael Gordon's The Sad Park ("inspired by recordings of New York school children’s reactions to the events of 9/11"), months after the last anniversary of the World Trade Center attacks (??).
Introduced in a moody artificial twilight, the quartet sat in the middle of the stage slowly immersing us into Dmitri Yanov-Yanovsky's contemplative music notebook. As livelier sounds splashed out of the Barbican stage, the light also swifted, mimicking the deep orange Iranian and Indian sun. Contrastingly, New London Children's Choir joined Kronos to sing Winter Was Hard (and then stood quite pointlessly on stage for a while...). Menace wandered and hope arose in the hour and a half that the quartet was kept in our company.
Two of those moments were my favorite:
Unavoidably (as an avid fan of '80s industrial Berlin), Einsturzende Neubauten's ruthless brilliance, ever present in a series of metal constructions that the foursome rhythmically banged;
and a piece that I lost count whether it was Gordon or Sallinen or Riley, but it involved a genius silent choreography of the musicians' upper bodies and bows.
All in all, a performance by Kronos Quartet is always a sophisticated and thought-provoking experience, but I have a few objections about this particular one. Last time I saw them, a couple of years ago in Athens, Greece, they had decidedly more nerve despite a setlist that included bands as serene as Sigur Ros. Interestingly, Awakenings' ethnic, let's-make-peace-with-the-world approach made them less vibrant.
Conclusion? Kronos - and the world, could use some more rebellion from where I stand.