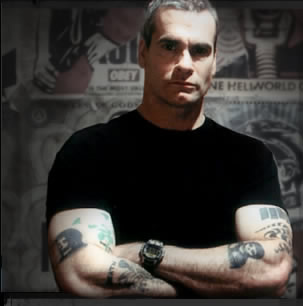 Regarding Black Flag, West Coast hardcore punk's relentless pioneers, I've always been for Keith Morris. However, when Rollings joined on vocals, he contributed in mosh pit masterpieces like Six Pack and Rise Above. How could I resist?
I had to see him live, despite the unwelcoming to punk ethos walls of Royal Festival Hall; me, along with a few other hardcore punksters and spectacular goths.
His uninterrupted spoken word marathon kicked off with the touring highs and lows (like swallowing a helluva lot of spit) of Black Flag, went via Captain Beefheart, his KCRW radio shows and stint as a National Geographic reporter, George W. Bush, Tibet... to end up somewhere I couldn't quite distinguish; I was half asleep by then.
It's not that he was boring. I was tired. But since the very beginning, Mr Rollins gave me the impression to cash in on his notorious punk days - the way he has for years now, taking the high road towards much more commercial and anti-anti-authoritarian stuff (if you catch my drift). I guess I gave up on him. I didn't wanna be an eye-witness to his ascent - pure descent from where I stand; and not just because he wasn't much of a punk anymore. But he abused himself and his art.
What are my impressions of Rollins as a spoken word artist onstage (cause I do own 1984 spoken word Black Flag LP Family Man, I do know what to expect)? On a DIY friendly stage, he'd be unquestionably funny, witty, eloquent, acerbic. But in a high-class venue, he looked much more talented in serving the masses, falsely modest and uncharacteristically likable.
Take almost any eloquent and street-smart artist, "punk", if you may - Richard Hell, Patti Smith, to name a couple of known ones (let alone the army of talented unknowns...). Their gigs are crammed with whip-smart social commentary and jokes. Rollins has a few things to say - and he can do it well; I'm just not convinced his commentary alone got him that far; and not his commercial rock 'n' roll status and ambition.
And for that, I don't respect him. He didn't have to work as hard to perfect his task - cause there are a lot of flashy events in his life, and even if he caused them, they do half the job. It's the witty recounts of a famously loud man that sell.