From punk to spank 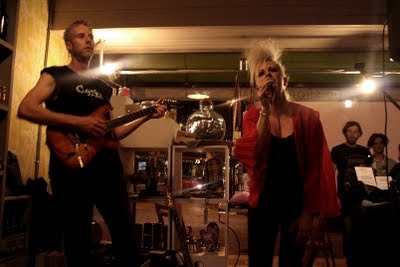 In a cosy Stoke Newington café known for its tasty bites a small corner was packed with sonic paraphernalia for the Friday night show. Andy Secrett came straight from the North with just a guitar and a friend on the bongo. An unusual combination, which at first glance prepared us for something Ethnic or Folky; but Andy is a soulful songwriter with a weak spot for Nirvana and Smashing Pumpkins. His cover of the latter's Ava Adore was seamlessly woven with the electric guitar dynamics and the underlying melancholy of his own songs. As for the bongo, it magically intensified the rhythm and depth of an otherwise typically alternative rock set.
Ms Lexi James Jr misleadingly declared Shattered at the very start; in truth, she was pure in-your-face energy. Brash and sassy with her punky platinum Mohawk and unabashed lyrics, she gathered people around her like magnet.
All in all, though, her stage persona came out too strong. There was also sweetness and funk hiding in there, like the rhythms dedicated to her big sister; something she could benefit a lot more from.

Review and photography by Danai Molocha, aka rockets4solitude
Posted by DMol at 4.9.11