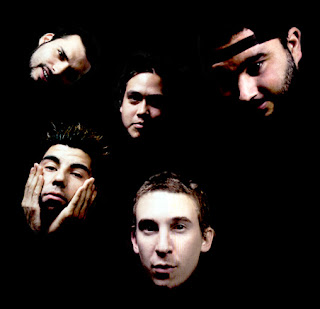 Just a few days before their appearance at Reading and Leeds festivals, Sacramento alt metal veterans Deftones indulged their London fans at a sold-out Shepherd’s Bush Empire.
As if to emphasise their raw, animalistic power; Deftones west London show was rather aptly opened by Animals As Leaders and Pulled Apart By Horses. It’s rare for gig goers to be so eager for what sonic sleight of hand support acts might have up their sleeve, but tonight’s line-up pulls off this particular trick. One that switched from pure rock sophistication to nonsensical metal angst, often without leaving us any time to adapt.
Which is how we like it.
Taking their places in an almost straight line, it seems Animals As Leaders don’t share their fictional farmyard brethren’s creed of some animals being more equal than others.
Taking their places in an almost straight line, Animals As Leaders defied the rock constitution of the leader-frontman and faced their audience as triple power.
Providing the atmospheric warm-up to the hell that’s about to break loose can be a tricky affair, but Animals were definitely up to the challenge. Just as you felt their slow-burning, instrumental rock dictate you best unfurl your yoga mat, Animals changed tack with some violently sonic assaults. Just when you thought they had been tamed, Animals’ beast from within took over.
Pulled Apart By Horses, on the other hand, didn’t fluctuate from their course; screaming at everyone and everything in their non-blinkered field of vision. But look a little closer, and their barbaric alternative rock sound goes hand in glove with a great sense of humour.
If anyone proved they meant business though, it was Deftones. A wild Chino Moreno ceaselessly jumped up and down on his own personal pedestal, which may or may have not doubled up as his monitor. He only left this furious activity to jump on his band mate’s pedestals.
One thing’s for certain, Moreno’s feet hardly touched the ground. And nor did his fans. Heads were being sharply thrown in all directions down in that sweaty pit. Neither stopped til more or less the middle of the show, when the band took a little downtime and Moreno’s energy was aimed at his guitar.
Diamond Eyes, Deftones latest studio release, naturally dominated but classics like Change (In the House of Flies) from the career-defining White Pony were epic. Adrenaline highlights like the rapping Engine No 9 rocked the empire to the edge.
Steven Carpenter’s phosphorescent guitar lit up the venue’s darkest recesses like a radioactive firefly in the dark. If we weren’t too absorbed by his awesomeness, the music mob assembled tonight would have laughed. I’m not sure whether drummer Abe Cunningham was strategically placed under that air-conditioning unit, but something was definitely fanning that hair that night.
Deftones seemed in no hurry to leave, eagerly entertaining us for the better part of two hours. If that was meant to be a warm-up, I can’t begin to imagine what those lucky bastards at Reading and Leeds will be treated to.

Review by Danai Molocha for www.soundbite.eu
Posted by DMol at 30.8.11