The curious case of Peter Gordon 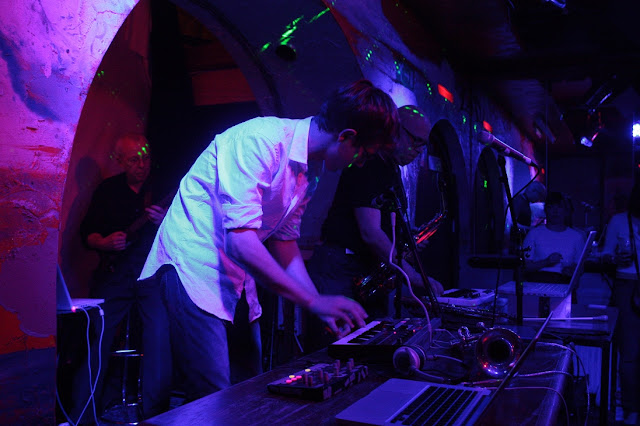 I can't say I was all that driven to see Mr. Gordon for his music. Despite his long history in the New York music scene (via Munich, San Diego and Santa Fe) delivering an ambitiously colourful prism of sonic work and collaborations with Arthur Russell and Laurie Anderson to the Desperate Housewives soundtrack, his Love of Life Orchestra just won't do it for me.
But he was there, in Hackney's intimate Shacklewell Arms, admission free, and Hot Chip's Alexis Taylor and Joe Goddard would be adding their own colour on the decks. I had to see what that curious case of Peter Gordon was all about...
There, inbetween the ladies and gents loos, laid the miniature stage that welcomed Mr. Gordon with his saxophones and synths, trumpetist Max Gordon, guitarist David Cunningham (previously of The Flying Lizards) and all their electronic paraphernalia. The music menu for the night was spicy mixes of new tracks and remixes of old ones, taken from the Love of Life Orchestra album – a retrospective that dedicated fan James Murphy (of LCD Soundsystem) recently released on DFA. 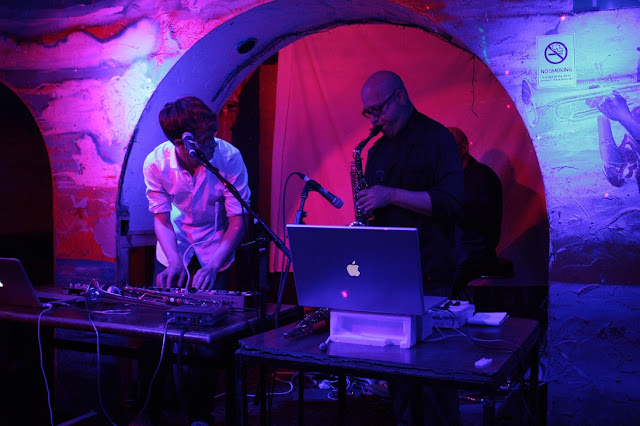 Prepared for some really annoying disco pop, in which Gordon's sophisticated, thunderous saxophones provide the only silver lining, I was amazed at how LOLO Stereo's moody, idiosyncratic brew drew me in. Painted in pink and blue shades, thanks to the pub's kitschy lighting, the trio found in these Arms the ideal decadent embrace for what they had to offer - an '80s movie ambiance you didn't see on video, but you actually got to play in; which soon, through the sound, evolved into a sinister Lynchian landscape.
That's when the multi-cultural persona of Gordon and the versatility of his compositional background became most evident.
It's not that the disco veil really ever prevented me from seeing the irony in the multi-layered workings of the prolific LOLO mastermind. But it still wasn't my cup of tea. And it was right that moment that I began to have a taste for it, almost hitting my head for not having paid better attention to its delicate sonic qualities and sense of humour in the past.
It wasn't long, though, before the LOLO disco monster came back to life. I don't hate all things strobe light (or pop saxes, for that matter), but any music that makes me feel I'm at an '80s New York gallery surrounded by pseudo-artists in oversized white suits gives me a rash. I gradually went from swaying to the electrifying rhythm to just sitting there upright, my senses stupefied. In a loose cinematic metaphor, the Mullholand drive brunette disappeared in favour of the predictable blond. A brainwashing feeling that skyrocketed with a marathon ending remix of Don't Don't, with its bubble pink female vocals singing “Baby” in a loop.
I'm not all against Hot Chip either, but I have to say that their after-show disco selections were even worse.
All in all, I do feel Peter Gordon and company exercised my critical and musical thinking. My reflex to break beyond the surface and see if there's more than meets the ear to the types of music I'm allergic to. But as soon the lesson was over, I had to rush out...
Posted by DMol at 31.7.11