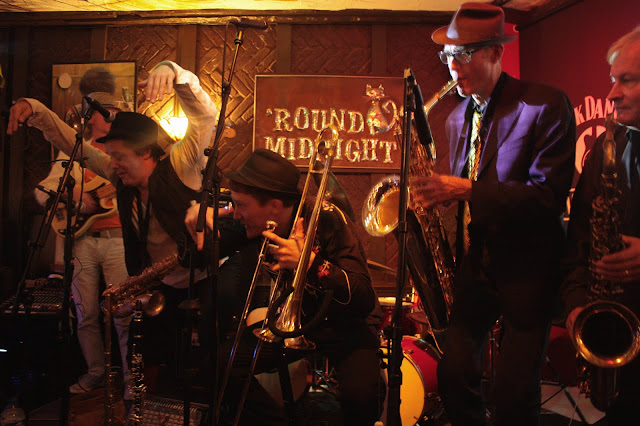 From the moment the septet crammed into Round Midnight's mini stage you could tell something intriguing was going to happen. The band's fashions – Trilby hats, black and white check designs, orange boots, stripy flip-flops – were pretty telling. Especially considering the multiple influences and diverse origins of the music that was about to follow.
A theatrical figure reminiscent of Tiger Lillies' Martyn Jacques and Ian Dury, Dan Spanner led the band in sounds that colourfully blended Jazz, Ska, Balkan beats, Blues and Hip Hop, but also dancing, circus and Vaudeville.Upbeat original rhythms like Sunday Arak (sang in French) and Punk Jazz Spanner met with covers such as Tom Waits' Raindogs. Hollow Man captured attention with a symphony of spooky voices, while instrumentals like Medicine showed off the band's strong horn section.
The septet had a few dedicated followers that formed quirky dances with every new sonic cocktail. To others, though, the changes in rhythm and style were baffling. All things considered, the band's signature eclecticism can add some flair to the show; but it's mostly in the traditional sounds of the horns where their true talent and the best part of their performance lies.
Review and picture by Danai Molocha, a.k.a. rockets4solitude, for www.liveatyourlocal.org.uk
Posted by DMol at 16.6.11