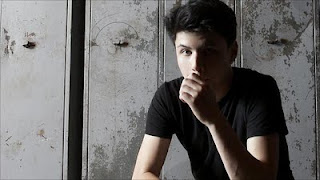 He hardly... swooned me, that (S)Woon. His soulful R&B lament was plain pain to my ears, making it really hard for me to understand what that acclaimed recent debut (that's Mirrorwriting) was all about. Of course, I could just as easily be prejudiced, as I simply can't understand this kind of music - i.e. softly moaning and groaning about romances; if you wanna groan, groooaannn man!...
But just as I thought that nothing could avert the audience from screaming madly in
tune with his every soul-burning chorus (enter Night Air), there's a small chance it was equally torn. A conclusion I derive from the fact that someone came to inform me there was a bunch of attendees calling him "loser" by the bar.
The massive singalongs and the swaying body of fans that followed his cover of Would I Lie To You - the '90s super hit of that other freaky pop-soul duo, Charles & Eddie - was enough to give me nightmares. Though, I have to say, this swoon a la Woon was far better.
What really did add to the show for us annoyed bystanders was the beautiful work effectuated by the lighting team- an absolute booster for the modern crooning that was dancing in the air.
If I could have just watched that with soundtrack from, let's say, Parov Stelar, we'd be talking perfection...
Posted by DMol at 12.6.11