Got my eye on you

I had been waiting for this.
After Anton Newcombe's idiosyncratic charisma was explicitly demonstrated in 2004 documentary Dig! I had been curious as hell to observe that tempestuous talent first hand.
As founder and only permanent member of BJM's ongoing music drama, Newcombe takes center stage only metaphorically. On the Empire stage he sits on the right side, quietly calling the shots; though he unashamedly spills out an authoritative "get it together" on the mic, when he sees the band lose their course during a song. Just in case you didn`t already know what the BJM/Newcombe dynamics were all about...
Other than that, all members take their turn to shine, like tambourine player and BJM mainstay Joel Gion, plus a couple of vocalists/guitarists 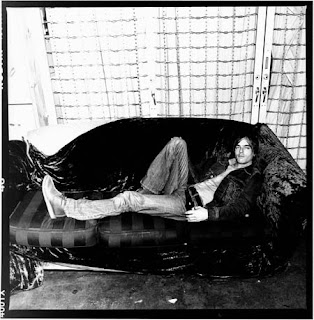 who cover the actual distance of the center stage. It's so rare to see such a strong (and strong-headed) talent step aside for the music - and it goes way further than Newcombe's placement on stage. It`s in the BJM pictures, it`s in the band playing tightly beginning to end, with absolutely no super-looks, no super-egos and no super-attitude to distract us; and you know for a fact that there`s at least one big, wacky ego in the works here. It doesn't matter what people say about his eccentricities and old drugged hell, or the countless member changes. Anton Newcombe and the band know how to humbly stand against the music, utilizing all temperament and weird dynamics towards putting a great show. It has never been more obvious.
Waking Up To Hand Grenades, Viholliseni Maalla, The Clouds Are Lies, Stairway To The Best Party In The Universe. New record Aufheben has it all.
From Dig! (notorious as it was for its` unjust and inaccurate portrayal of Newcombe) I had gotten the impression that he was standing in the spotlight as the lead wacko experimentalist. Maybe that was then and this is now. Things have changed. The only straight line here is the music. Good music.
And the best part? A long, filling show without an encore. They gave us their passions, and time and they disappeared. I love this band. 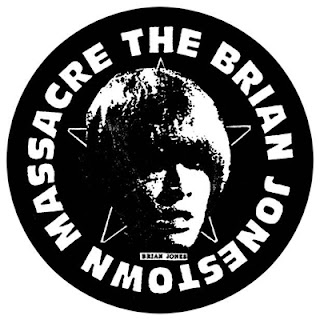 Review by Danai Molocha (photography by BJM web archive).
Posted by DMol at 18.7.12