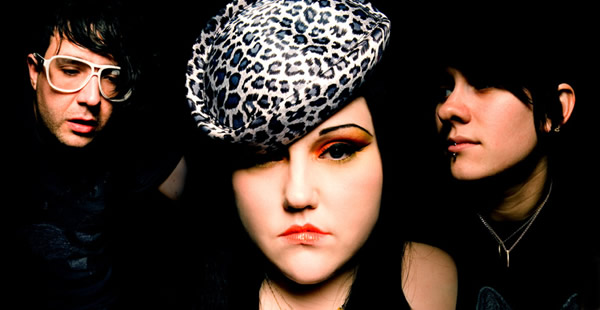 It’s scary to see Gossip’s Beth Ditto in the cover (or cover-story) of so many mainstream magazines, all at once, following the release of their fifth studio album A Joyful Noise...Especially when that is accompanied by a series of increasingly stylized videos, and comments about their most accessible disco pop record to date.
On top of it all, tonight Ditto appears on stage looking ever so elegant, a proper lady in her white print dress. You could ask: Will one of the bands (and frontwomen, in particular) that came into prominence breaking boundaries start compromising for the benefit of Mac make-up and Chanel dresses?
Before we answer that, all eyes on Comanechi. Noisy, feisty, often almost schizophrenic, that fucking Akiko ‘Keex ‘ Matsuura runs for best front woman we’ve seen in a while, personifying to the max Comanechi’s wild punk acrobatics (live also on the 19th of July at The Lexington).

Back to the main act... In all fairness they were punk crazy, gender-free, stylish disco lovers to begin with. And Ditto was never short of impressive (bad or beautiful) outfits. From the moment the rhythm starts to fill the pretty packed Empire, one thing you can’t doubt is their gift. There’s something about Gossip and the rhythm. You get the sense that these guys may in many ways have been underprivileged, but nothing can get in the way between them and the beat. The audience senses it and bounces up and down, a little more or little less since the very start, the dance ecstasy peaking somewhere between Standing In The Way of Control and Heavy Cross (at the encore). Pop Goes The World, Perfect World, a party of street-smart dance gems. All of security’s efforts can't stop those kids from crowd-surfing (phew…!).
I don’t know if it’s just the dress that makes me look at the otherwise lively Ditto as a bit more “proper”, compared to the last time I saw her (over three years ago); but still she doesn't sell herself short.
One of Gossip’s best features are, hands down, Brace Paine's mean guitar lines, and he delivers in perfect devotion. But it took this gig for me to notice that heir keyboards are pretty wicked too (especially when he's on them - can't help it, I'm a fan).
A short break serves Ditto to change into her good old negligee, the kind of "outfit" that has made Gossip's past shows so eye-catching. Should I be satisfied she finally went back to familiar territory? She could very well be conscious of nearly disappointing her public, the one that waits for that shock-steady extrovert they can live vicariously through. I catch myself wondering how much of it is still product of personal freedom and spontaneity…
But she runs through the crowd getting us all hot and high, and there’s not a soul in the Empire looking disinterested (apart from that punk barman). Restless Ditto ends up in Level 1's VIP section, saying hello to the Raincoats, teasing freaking Perez Hilton and paying tribute to the late Whitney Houston with an a capella I Will Always Love You (why Beth, why????).
Suddenly, Fleetwood Mac blast from the speakers, seamlessly binding live and recorded music with the all-time classic The Chain - I hate their famous geeky pop harmonies, but talk about a mean bassline!!
The room lights are back on, but Ditto is still hovering in the box seats in a seemingly ever-lasting, ever-cool-and-casual party.
I’m still dancing.
Maybe that answers all the questions.

Review by Danai Molocha (with miscellaneous photography borrowed from the web...)
Posted by DMol at 10.7.12