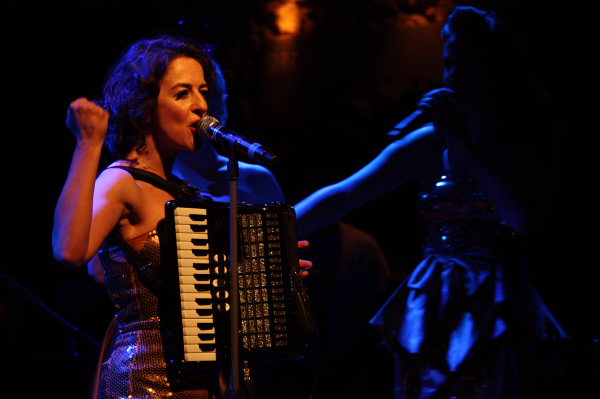 With a bigger backing band than I've ever seen them before (and I have, a few times), the trio Puppini rocked it and swang it once more - though against a far more insipid audience. Yep, the people facing them were mostly... mature and passive, and if it weren't for a couple of crazy girls dancing wild at the back, you would've thought it was the band's fault. They might have chosen a few of their quietest songs for this set, but they were decidedly and categorically not the ones who were being boring (and bored). 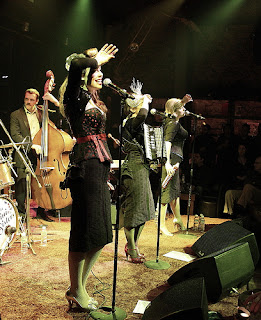 First things first, it was music Casanova Earl Okin that warmed up the evening, with his ironically suave, sexy and humorous guitar ballads.

On to the Puppini clan, then... Three amazingly harmonized voices, which come with three equally beautiful, vivacious girls that play keyboards, accordion and violin, swept the stage with oldies and goldies like Diamonds Are A Girl's Best Friend, to Beyonce's Crazy In Love - via Boogie Woogie Bugle Boy (a personal favorite), Millionaire, Tu Vuo' Fa L'Americano and I Will Survive.
The girls know how to swing it; they're spicy, funny; and real. They didn't play my top choice, Spooky (find at http://bit.ly/Ik0SXO), but I can't really hold it against them. They could do better - but they steadily respect music, their talent and their audience.


Review and misleading photography (from Puppini's previous gigs and NOT the O2 Empire) by Danai Molocha
Posted by DMol at 23.4.12