Throwing Muses @ Shepherd's Bush Empire (and the Bush goes on...) 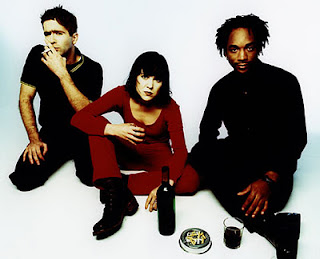 Let's start the review with two guys that came up to me and said, and I quote, "Did you know them before? We thought we were coming to see The Muse... What an awesome band!".
My kind of band, I'm quick to add. It brought again before us a time when rock was effortlessly smart and mature, feasting on its' young and rebellious nature all the same. A quality - or, rather, a combination of qualities today's bands quite honestly lack.
The Muses, in very different ways than "The" Muse, know how to throw you off course, and therefore off your musical comfort zone by temperamentally changing gears several times within a song.
Fronted by the pleasantly sinister Kristin Hersh (now well in her forties) looking all innocent and cutesy - and then attacking you with a violent, sensually smokey voice.
She often brings up nuttiness (one of her solo career highlights is, unsurprisingly, also A Loon); and the band's rollercoaster mood swings are kind of scary. That's what makes them fascinating.
Yup, Hersh sounded kinda stoned when she spoke - unless she had just left her dentist's chair; but they were obviously on good form.
I never quite liked the pop breeze Tanya Donelly brought to the band, so I can't say I minded her absence (and I never liked her band Belly, largely thanks to that annoying '90s hit song Feed The Tree).
I got much more disappointed they played a slowed-down version of Bright Yellow Gun... But they came out for two encores and they hardly got boring (maybe for a minute there, while I was working).
Their brainchild is full of tantrums, guitar chord after guitar chord. From the '80s Rabbits Dying to the beautiful Your Ghost, Hersh's solo collaboration with Michael Stipe (on heavy MTV rotation in the '90s), they got the muse; and they throw her time and again against the wall just to see how well she bounces.
Sickos...
Posted by DMol at 2.11.11