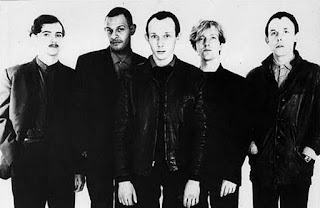 Regarding Magazine's reunion, I had been prepared for the worst. Fans that had been present at one of the band's recent performances had made sure of that. But still...
One of the most inspiring - and awe-inspiring - bands of the English post punk era was meant to be an  effortless music lesson - and, boy, was I NOT dissapointed.
Surely, there were times that Dave Formula's characteristic keyboards sounded out of pace (and I don't think my significant distance from the stage was to blame). However, Howard, Devoto, wasn't all that far from the semi-psychotic weirdo of a frontman he once was, and seminal Magazine moments (see Motorcade) lived up to their legend.
Parade was, disappointedly, a slowed down version of its' old whimsical self;
and pure proof of Devoto genius, like Cut Out Shapes, was conspicuous by its' absence. But they made up for it with a double encore and other hits, like Shot By Both Sides, played in top form.

Any flaws reunited Magazine demonstrated, though, didn't seem that far out of hand. This was a band that didn't seem to give a f*** about rehearsing to perfection and giving out a polished respect-my-legend reunion show. They were rather a loosely-knit unit obeying their own individual tantrums and obsessions.
They might never reach the height of performances like in the aforementioned Cut Out Shapes video - and did they ever, live?
That, they could never again be.
As for the rest, I don't think it's in their nature to care. And that's what post punk expression was really meant to be.