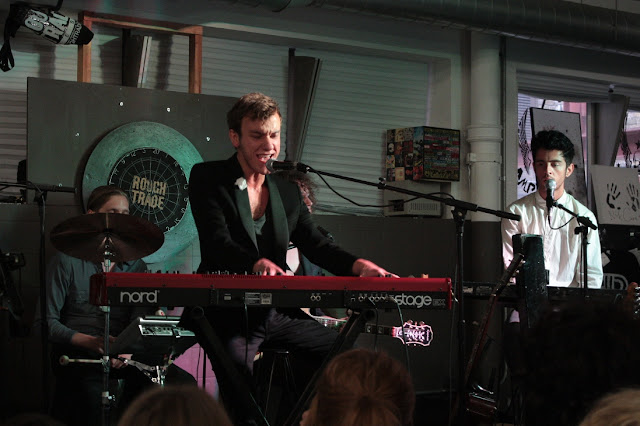 Max McElligott and his band, Wolf Gang crammed the tiny stage with keys, drums and guitars facing a full Rough Trade store. Their fans had been lining up outside early on, as the all-fresh release of their debut Suego Faults filled the air with anticipation.
The band surprised us. Trading their usual cocktail of upbeat Indie Synth Pop, for some romantic, sophisticated balladry. A wise decision, probably, after an electricity-charged night at Camden's Barfly, that left McElligott admittedly “hungover”.
His charmingly inebriated state made him lose a word or two but this suited the band's melodic sensibility, beautifully. Abandoning their usual supply of danceable rhythms, Wolf Gang favourites such as The King And All of His Men and Lions In Cages, sounded strong in their low key purity. A special bonus - singer/songwriter Kyla la Grange lent the boys her deeply felt female vocals to accompany Dancing With The Devil.
It was a mini showcase of Suego Faults valuable pop assets and proof enough that Wolf Gang don't limit themselves to a bunch of radio friendly anthems.

Review and photography by Danai Molocha, aka rockets4solitude, for Live At Your Local www.liveatyourlocal.org.uk
Posted by DMol at 2.8.11