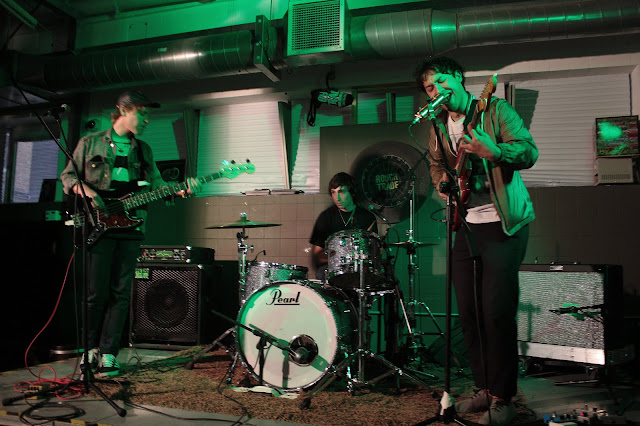 There’s a buzz around Ruban Nielson's Unknown Mortal Orchestra, thanks to a couple of catchy tunes that streamed online months before their recent eponymous debut. Songs like Ffunny Friends and How Can U Luv Me have an undoubtedly playful retro charm favoured by blog circuits.
Competing with the late afternoon shoppers at Rough Trade East, the band had a hard time getting any attention. Nielson came straight out and invited everybody to come closer, as the Psych Rock mysteries of their '60s-infected debut started to unfold.  People eventually built a warm fan base by the stage but, somehow, the pop hooks that gained this Unknown US orchestra its' cross-Atlantic reputation, weren't that arresting live. It was Nielson's powerful krautrock outburst, near the end, that filled the show with the uplifting energy that made it memorable.
According to several music journos, Ruban's music often evokes rock veterans like Captain Beefheart but maybe the time and place didn't quite inspire the band to fully deploy his sonic techniques. UMO could probably take a few lessons on how to translate their idiosyncratic twists and turns on stage.

Review and photography by Danai Molocha, a.k.a. rockets4solitude, for Live At Your Local www.liveatyourlocal.org.uk
Posted by DMol at 18.7.11