These scars in my flesh, I'm bruised and I'm bloodied 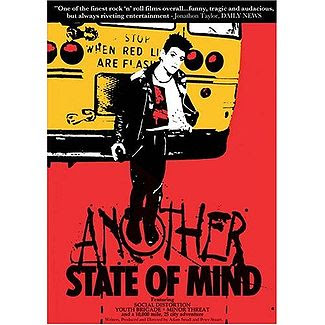 Here's to Orange County, the Californian destination that spawns rock'n'roll's most talented eccentrics - from Jeff Buckley to our hero for the night, Mike Ness.
In an Empire full of sculpted rockabilly hairdos and i-heart-mum tattoos, Muddy Waters' Mannish Boy provided the eloquent opener to welcome Ness & company onstage. At last, time for crowd-surfing...
The O2 Shepherd's Bush does occasionally party crazy to some Australian rock royalty (apparently...), but still mostly manages to stay tied to the ground.
But Social Distortion did it, with pit anthems like Bad Luck and Story Of My Life (why do people crowd-surf with these songs? They should be on the floor, weeping!!...).
Our boy Ness has kept his knack for stories from the streets of punk intact and continues to recount them with a hoarse voice that screams, um...punk-Ness. Johnny Cash tribute Ring of Fire typically fired things up (that's what it's there for). In short, Social Distortion were Social Distortion - that thing you know and can rely on, like an old punk couch.
Finally, there were two more things that caught my attention:
a) Social Distortion fans are extremely loyal; and surprisingly multi-culti. Every second person had an accent - and by that I don't mean Cockney, or even Mancunian. They very possibly traveled from all over Europe just to see them. Or I took the wrong turn for Womad there somewhere...
b) Social Distortion fans are extremely disloyal. Despite the abundance of SC T-shirts, half the audience was simultaneously coveting:
New York Dolls
Soulfly
Motorhead
Varukers
with a touch of Amoeba Music (top Californian destination for independent record lovers) and CBGB's (top NY destination for our proto-punk drugs of choice) - the eclectic ones ...And these are to name only a few (they were so many I forgat).
On that final note, whoever hasn't yet seen the utter 1984 punkumentary Another State of Mind, staring an outrageous Social Distortion and Youth Brigade,
now is definitely the time.
Posted by DMol at 15.7.11