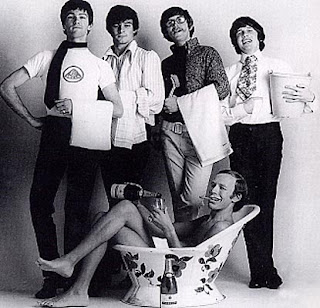 I was among the few people (under the age of 50, at least) that were actually looking forward to seeing The Zombies.
Their tunes have always hidden a cool sexual energy in their retro romanticism. And after the instrumental part they played in Thomas Vinterberg's 2005 film Dear Wendy - where they provided the main source of inspiration for the teenage gun-addicts The Dandies -  The Zombies found their way back into our hearts in the '00s; not that they ever had left in the first place.
So, there we were, waiting to see the band back on stage for it's 50th anniversary.
And, boy, did they look it! Frankly, looking at them couldn't help but bring to mind those '80s comedies where some old, decrepit wannabe rockers grab the guitars and cause... havoc. It was far from havoc, but seeing Colin Blunstone open his arms to the public singing God Gave Rock'n'Roll To You (and the public's voice could hardly come out, let me tell you!) WAS pretty comical.
You'd think sitting there laughing was all I was doing at The Zombies that Friday night, but I actually found myself astounded at their lasting musical ability. Cause behind those wrinkly, long gone looks, beautiful songs as hell kept coming out the one after the other - and we're not only talking classic gems like Time of The Season and She's Not There.
Songs like Moment in Time or Any Other Way, from new album Breathe Out, Breathe In established the band's ability to find true psycho-beauty and honest rock feeling in their melodies, craftily putting them down in notes for all to share. Rod Argent is no doubt in top song-writing form.
I was deeply moved. Those men really got the magic, 50 years on...
Posted by DMol at 2.6.11