Dawn of the Dead with Claudio Simonetti's Goblin @ Union Chapel 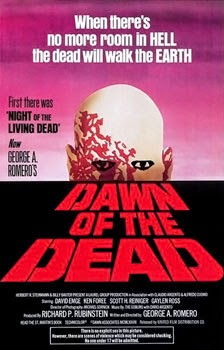 My fear when booking for Goblin was bruising that unbeatable image I had of them while watching Dario Argento's Suspiria and Profondo Rosso: A bunch of unorthodox Italian psychedelic adventurers engaging in cult '70s giallo like no other.
Coming face to face with an unadventurous 21st century reunion trying to relive past glories through dead bodies (on the screen people, on the screen!)? A tad too tacky for my taste..
But Claudio Simonetti, co-creator of Goblin and restless music demon, along with a team of new collaborators, still jams like nobody's business. More than that, he knows how to deliver a spirited Q&A when he has to. From laughing to himself reminiscing past "funny" incidents, effortlessly igniting interest and laughter among all of us, to sassily calling...well, basically crap an unsuccessful remake, he was a treat. As it turns out the band have a huge lady fan in the Vatican radio, who plays their music often ("they are pretty open minded"). His response to her invitation? "Are you sure about this? Well, demons and angels - we're in the same business after all!"... When he took his place behind his keyboards, with two guitars brutally synchronizing in the front opposite him and the drums on the further end, that's when it got intense - with or without the zombies eating human flesh. Romero's flick, as Simonetti pointed out himself, is a political and social commentary way beyond the '70s tacky aesthetics. The walking dead returning back to the mall, that's where their affection lie of all places. Is that all their past lives amount to? Despite its unholy looks, the film knows how to reverse a stereotype or two.
The music was there to poignantly point the finger at the human anomalies in a double allegoric attack of vision and sound. The guitars energized the horror. There were truckloads of talent and brains vibrating behind those dead-eyed killing machines. As a-live as it gets.
It finally dawned on me: Simonetti's Goblin are 21st century innovators that still have a good scare or two under their sleeve. No freaking doubt about that.