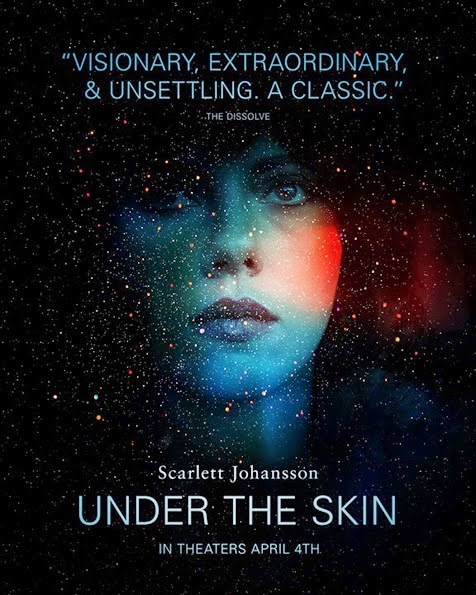 In a largely dark and dialogue-free film about an alien, a lot more than the screening itself bordered on the out-of-place.
Somebody knocked my phone out of my hand, which in turn plunged one floor down, and running to retrieve it, I got to have a quick chat with Adam Pearson - the disfigured man playing one of Johansson's man-victims in the film in question (his friend was kind enough to put back together the scattered pieces).
Then I randomly visited the loo (as you do), and I waited in line with an impressive, black-clad PJ Harvey (as you really never do).

It didn't take much to identify the Royal Festival Hall crowd, packed with indie wannabes and mystic beauties. James Lavelle, Meltdown Festival's curator, and responsible for this eager gathering, briefly came on stage to introduce the composer and her guests. And they sucked us all in..

Mica Levi's beautifully unsettling score for Jonathan Glazer's Under the Skin couldn't have attracted quite an ordinary crowd as it was. Like an exotic spider crawling up your skin in the dark night, it was tickling you with quiet questions, enigma and suspense. But you ultimately had to give in.
Urban and nightmarish, it drew from Levi's John Cage and Iannis Xenakis years in Guildhall, peppered with some modern-day urgency and sex-appeal. Minimalist, like the film itself, it equally didn't need to say much. They let the silence speak - and it had a lot to say indeed.

It was understandably hard to tune in to the dj's beat at the after party. One was compelled to walk the London streets in the last glimpses of twilight and see what the coming night holds. Hopefully, not a man-eating seductress like Scarlett - but something extraordinary none the less.