Inevitable Concoctions - From Spinoza to Twilight

A romantic dusk light settled outside Dalston's Oto Cafe, and an equally romantic one, created by the numerous candles, settled inside.
A new Kammer Klang evening was planned this month at Oto, the 3rd of the 4th series (they come back periodically, with new and interesting contemporary classical, electronic and improvised recommendations), starting with the first duo on the bill.
Soft as a spring breeze were cellist Lucy Railton and pianist comp
poser Leo Chadburn - only, before they got too suave, they stopped, just to start again. They brought together little pieces from John Cage's 44 Harmonies from Apartment House 1776 (the entire work lasts 103:26 start to finish), performed beautifully. Which only makes you think of how difficult it must be to perform such a fragmented piece, in need of technical skill, but also discipline and psychological restraint. Personally, I would find it hard enough to control my emotion, to which I'd put a barrier before it even began to flow.
Irish artist Jennifer Walshe went on next. Setting aside her established compositional skills for a fearless vocal piece entitled All The Many Peoples, she gave a vibrant performance. It didn't always work for me, but when it did it was smart, and it was good. The "...Peoples" incorporated "All the single ladies" and awkward internet snippets on how Twilight heroes Edward and Bella get pregnant - and the even more poignant question, how does vampire Edward get an erection? -, along with Strindberg and Beckett-inspired monologues. 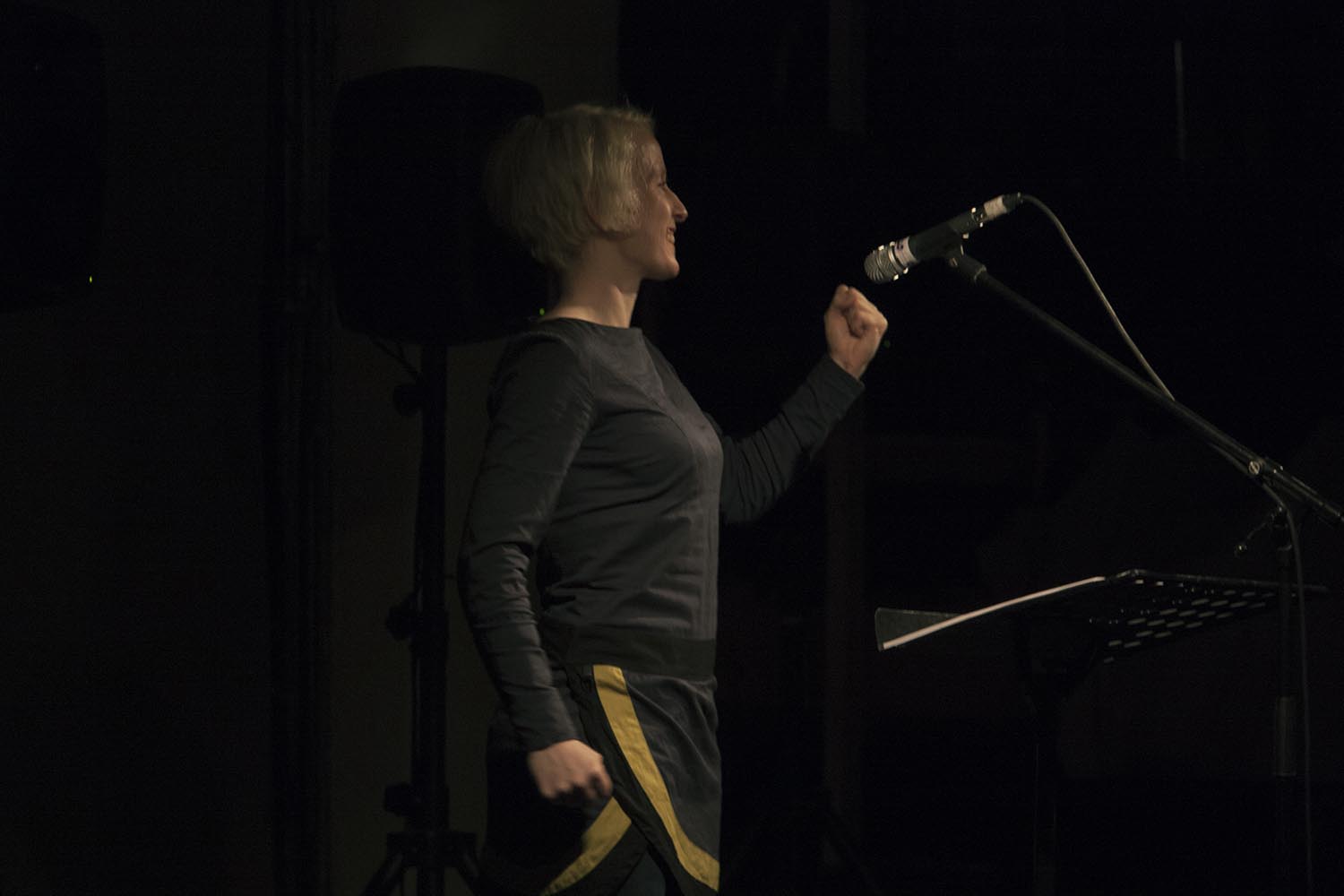 Walshe sometimes overdoes it on mannerism, which could potentially work, as a novelty, but I felt like I had witnessed those spastic, idiosyncratic stutters a million times, and they almost always looked as inadequate (not that this inadequacy refers to Walshe's ability, rather than her choices). She had much more original, dynamic and funny moments, followed by expressive movement. Her more stirring verses echoed Laurie Anderson in Born, Never Asked in my head.
On to the final performer for the night: Parisian composer Sebastien Roux asked the audience on the sides of the cafe to move opposite a line of 9 speakers, which he had placed at the back of the stage, in order to get Inevitable Music the way it was initially designed.
Inspired by Sol Lewitt's wall drawings, which, in Roux's eyes, appeared highly musical, he created pieces that translated Lewitt's visual instructions into sound - each lasting from ten seconds to ten minutes. To make the listener's experience more immersive, a pre-recorded voice announced before each piece its title, as well as the means used - the "instruments". Some pieces had more purpose than others, which gave a light impression of space-fillers - Inevitably the last piece, I remember, ended the evening inadequately...
Before that, though, there were uplifting electronic beats (the best part, hands down), alternated with a Bach cantata and oscillating wordplays, such as "Enough to be smart" and "Our soul is Spinoza". Which was all pretty good. 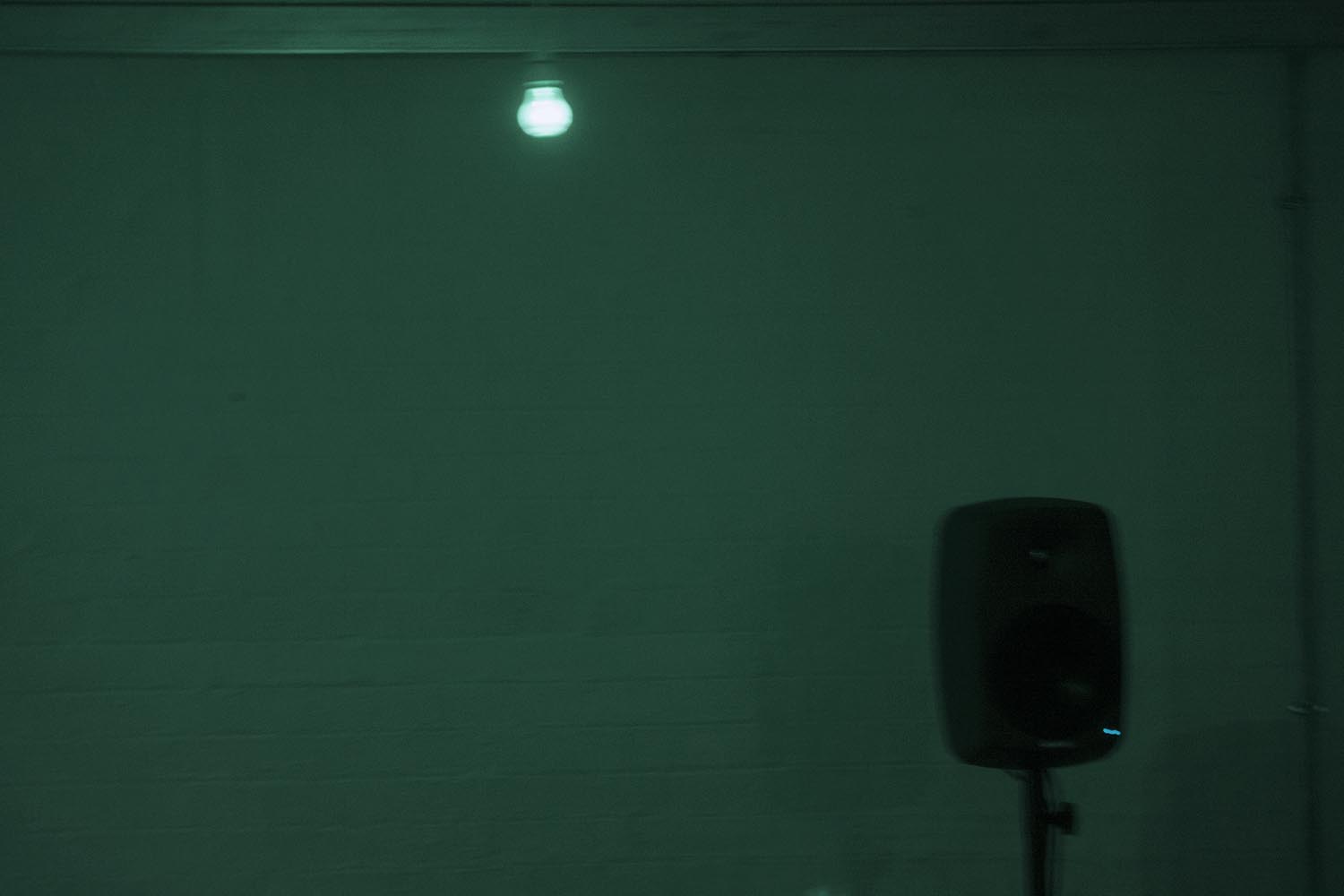 Text and Images by Danai Molocha, except Sol Lewitt's drawing by Kammer Klang.