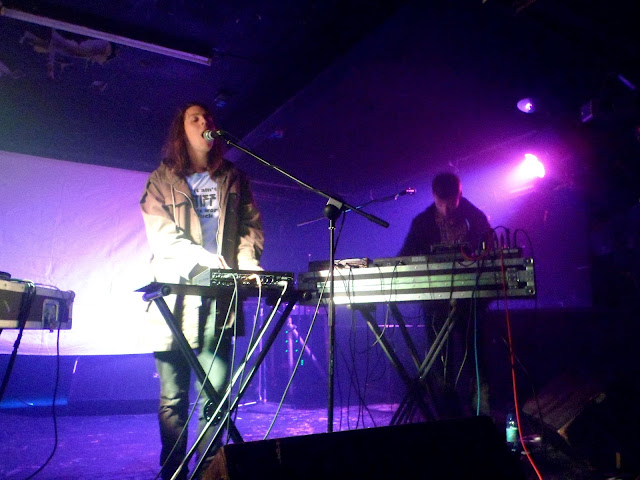 I remember the exact moment I fell for Darkstar. I was braving the Field Day '11 crowds to rush to some band I don't even remember, till I spotted a crammed tent and a sprawling audience ritualistically circling the stage. I stuck around, and it's this memory I now only hold from the lot, and what I mostly treasure from the festival altogether.
A vulnerable, slow-burning but sophisticated electronica, combined with a long-haired singer who hugged the mic like a desperate teenager who'd just had his heart broken. The sound was forward, the looks weirdly deja-vu - but it's the pairing of them both that, knowingly, made them stick out.
One by one, the gems of their debut on Hyberdub, North, paraded in full splendor: Deadness, In The Wings, North, Dear Heartbeat - not that I really remember their setlist then, but I do constantly listen to North now and it happily sounds exactly like it.
Back to the present and the gig at hand - one I waited over a year to attend in peace, making me snub Soundgarden at the O2 Empire (sonically irrelevant, you're gonna say, but can't easily say no to sexy hard-rocking bastards now, can ya?). Electrowerkz in Angel provided the setting - a dark, industrial space that fitted those Northern boys like a glove. 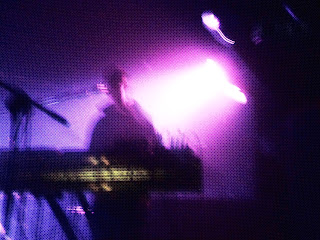 Can't really complain about the sound: The trio seemed physically and sonically devoted  - simple, focused, to the point, simple again, cause I love seeing a band that let their sound shine through, seemingly not trying too hard, but giving their hearts to the result. They mixed up bits from their new album News From Nowhere (first single Timeaway out now), out on Warp this February, with a glimpse of North, like the rhythmically aching Human League cover Gold. The sound on News... seems more electronically uplifting, as is its cover - colourful and flowery, as opposed to North's bleeding red industrial shot.
And... after whole 45 min. on stage, the band went off. Maybe it was almost an hour they graced us with their presence (I don't think it was), when there was no lack of songs or strict festival time-slots to put up with this time. Without no encore, of course - and though I'm happy they didn't put up with that kind of pretense, maybe it was their label who didn't want them to give away too much of their upcoming release, nor focus on the old one... All I truly know is that I'm freaking pissed off!
An ignorantly loud girl stood, first row, next to the speaker joking and chatting as fluently as possible (I even think she was one of the band's circle), not once getting my sinister looks to shut up; this one too spruced up the experience nicely...
That's all too bad, boys, when otherwise there was the beauty and the comfort and the respect and, yes, the performance that could've made this night a really good one. You missed out on that one.

Review and photography by Danai Molocha.