Bat For Lashes @ The Forum 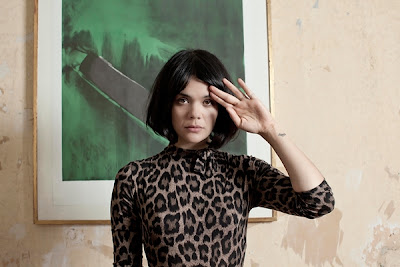 Songs of the siren

Having come up with a distinctly more accessible, but equally arty and tasteful pop record, Natasha Khan embarked on a UK tour bringing The Haunted Man to the vast audiences. Sold out the first night, almost full the second, the gig had the smell of success before it even begun. Leave it to Khan to gracefully lift the weight of expectation.
In a sea-themed set scattered with fake rocks and the tender light of lanterns, seemingly reminiscent of the remote scenery she drifted on in order to write her third record, a lithe siren hit the stage in a long black-and-white brocade dress. Starting with Lilies and moving on to the ritualistic What's A Girl To Do? she seamlessly blended old and new work - Marilyn and Horse And I, Siren Song and Oh Yeah - in a harmonious sonic palette of which she was the indisputable star. Which doesn't go to say that she wasn't beautifully supported by her backing band. 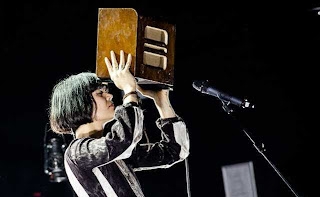 "Climbing" the rocks, dancing and sparkling with delight at her own success, Khan exuded more than anything her satisfaction to perform music she believes in, making her good spirits addictive as she interacted with her audience (screaming at her that she's sexy as f***!) and said hello to her family. An expressive and theatrical performer, she swung and posed like a skillful dancer (well, she did take a few dance lessons in her quest for inspiration), transferring herself side to side and from the piano to a vintage radio, navigating through her many talents and facets. Laura, sung in the company of Ben Christophers on piano, was vocally striking. But Khan's emotional lore was rivaled by her ability to make you sway with tunes such as Rest Your Head and All Your Gold. 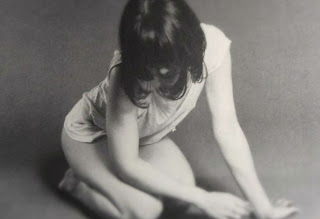 Pairing up the title track of The Haunted Man and Daniel for the encore she rhythmically danced us goodnight. I quite miss her more enigmatic side, as I miss the quirky girl inside this newly found mature, well-centered woman (she probably doesn't agree). But she did transform with beauty and grace at that.