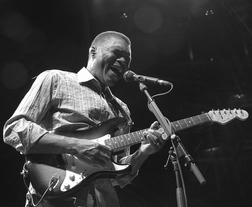 I passionately love the blues, but I wasn't immediately hooked on Robert Cray's rather polished sound. A blues veteran for over 35 years and several times Grammy Award winner, friend and collaborator of Eric Clapton and John Lee Hooker, he nevertheless failed to channel me a sense of charisma at his opening Bluesfest show.
To be more specific, what failed to move me was his vocals (with no help from the tunes that accompanied them). Pretty generic and similar to plenty a version of hit-making blues singers, who just don't seem to burn inside. If they do, well, they simply don't speak to me.
What unfailingly won me over, eventually, in Cray's performance was his guitar-playing. This is what he's most known for, anyway, and with good reason. The chords shook under his fingers, in a small selection of original, heartfelt, syncopated masterpieces. Not all songs were that captivating, but the ones that were were absolute winners.
His latest studio album This Time (2009) was his first in four years. Since I didn't know a lot about Cray before this performance, I started from there and went backwards on his catalog, trying to discover those moments that captured my soul. I haven't managed to find most of them still, continuously stumbling upon his more digestible and neat hit-makers. But one thing is for sure. I'm gonna keep on trying.

Review (but no photography) by Danai Molocha