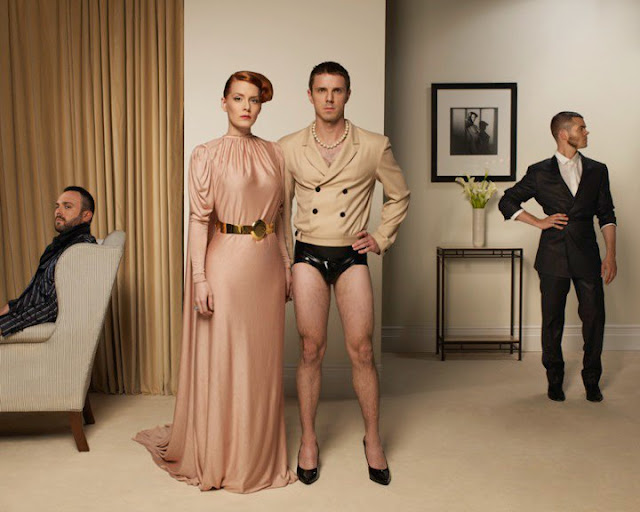 ...I, for one, did; courtesy of Scissor Sisters. And I can't say my system is built for all that jolly pop. I was already beginning to feel disc-a-llergic after only a couple of songs.
The audience, of course, looked addicted. To a wild Ana Matronic (I've always been a fan, she's hilarious. The show's joke was, naturally, the Bush); and a restless Jake Shears.
My favorite of them all, though, were the back-up singers stage left, and their perfect little outfits: Short black tops and golden Lycra hot pants with see-through zebra tights (day one); tight zebra overalls (day two). It doesn't get any better than that (though Jake's extravagant fashion choices, naturally, beat them to the punch).
You'll think why such an obsession with outfits in a freaking music review. Well, maybe cause that's half the point in a Scissor Sisters gig: Sport the darn Lycra, sing-a-long Let's Have A Kiki (as in having a good time, in NY slang, according to professor Matronic) and dance your ass off. The song is part of their upcoming fourth album Magic Hour (due end of May) and it was decidedly one of the highlights - especially as it was accompanied by a super dance routine, performed by the two lead singers and the sassy back-ups.
We had a Manhattan kiki alright.
Only The Horses, the album's first single, rather unfortunately reminded me of any other pop factory single in the charts (but it is, quite honestly, more bearable than most). But there was also those old crowd-pleasers: Take Your Mama, Mary, I Don't Feel Like Dancing - ironically, since most vigorously of them all danced the singers that sang it, of course.
Thursday's show, inescapably, was blackened by the passing of disco diva Donna Summer ("she is our angel now"), the voice that breathed life to the Scissor Sisters soul. And thus, she will continue to live through them hereafter.
The Stonewall riots, the first great rebellion of the gay community against a hateful homophobic government, which took place in NY's Greenwich Village back in 1969, was the second notable event that turned the Sisters all serious. And dead set to bring across a vital message - that of owning up to who you are, your freedom against their oppression.
They might make you shake your ass a lot (and they shake theirs), but they do know how to accompany it with a brain. That's exactly where they differ from all those other bottoms at the top of the charts.

P.S. Hail to the fan who observed me quietly, struggling with additions on a calculator while the whole club was dancing. When I later openly joined them, he said to me upright: "Thank God! I saw you with that calculator and I said "what the hell is she doing?!!"... It's alright, man. I'm cured now.