The leopard in the room 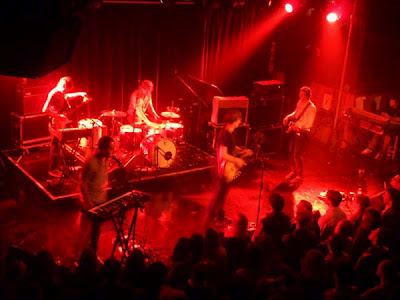 I discovered Shearwater as late as 2008, with their 5th release Rook. And though I usually cringe at one's overbearing, for my tolerance limits, display of lyricism and love of nature, there was something about those guys. Or some - things...
For one, there was an informed and multi-layered sonic landscape.
There was an authentic melodic spirit that intensified the band's identity, fairly uncommon among modern indie bands.
Two albums later, via the inspired Golden Archipelago, here comes now Animal Joy to prove me that Shearwater haven't let me down (though this album did keep me a bit less interested).
Not in the studio, and definitely not on stage.
Up there, Shearwater have a lot more than founder Jonathan Meiberg's given talents to thank. ...Like a passionate five-piece swapping keys, guitar, singing, strumming, drumming. Their charisma to juggle lyricism and palpitating rock electricity goes to show they know their stuff well; and they use it to full effect, for a good show - and in depth.Once again, it was Rook highlights The Snow Leopard and Rooks that stood out. 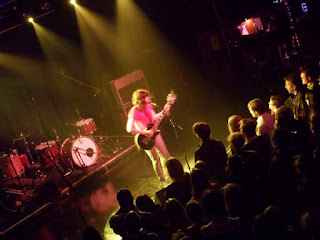 But when Meiburg was left to his own devices, with just a guitar and one more man for accompaniment, it got downright dull.
My goodbye lines go to the (second) support act Julie Doiron. Shy, nervous and bubbly like a little girl (she's far from...), she managed to work through it all with a goofy sense of humour.
Back in the nineties, I found her debut solo album Broken Girl terribly boring. This time I almost enjoyed it; but then, she did have to bribe me with Pavement's Shady Lane...


Review and photography by Danai Molocha.
Posted by DMol at 5.4.12