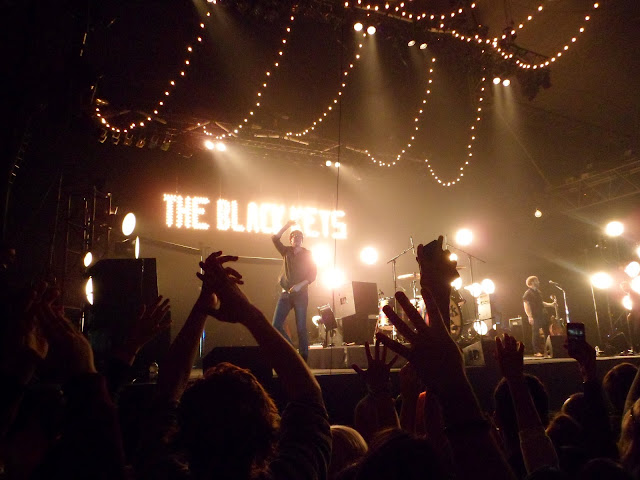 Two bands with common blues garage roots got together up Ally Pally for a torrential three-in-a-row - and I was unlucky enough to attend only once.
I first crossed paths with both of them on the big screen:
The Black Keys I fell for the moment When The Lights Go Out charged with unabashed electricity yet another burning scene in Craig Brewer's Black Snake Moan.
Band of Skulls I had only read about before, but their particular contribution in Twilight: New Moon put me off reaching out to the rest of their songs. 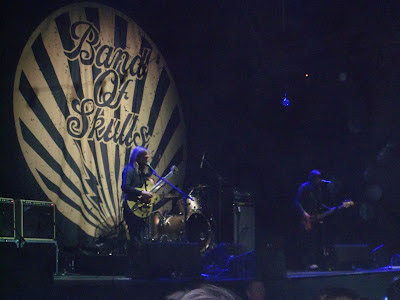 Black Snake Moan is a provocative account of Memphis' everyday sexual frustrations (to put it shortly) and it's packed with crotch-tingling tunes. Twilight, on the other hand, is frustrating altogether, but has often shoved me into researching the alternative melodic doings of Grizzly Bear, Death Cab For Cutie or Vampire Weekend, who I otherwise wouldn't give the light of day (Iron and Wine, in contrast, I continue to ban from earshot...).
Often finding the electric blues less edgy than I would hope (let's say that John Campbell doesn't quite do it for me), I spotted in the Keys a fresh, sexually charged rock context that fascinated me. And, warmed up by the Band of Skulls, I saw in last night's performance more substance, character and validation of my faith in them that I would expect.
To begin with, English trio of Skulls - with apt and cool bassist Emma Richardson, who I hadn't even paid attention to before - rocked it out with tunes beyond XFM sensation The Devil Takes Care of His Own, or Bruises (I love the burning Death By Diamonds and Pearls). It was the less commercially successful songs that were actually worth the attention - and the band modestly abstained from playing Twilight's Friends. My job now is to definitely look into them a bit more.
As for The Black Keys... Opener Howlin' For You got us all jumping and spilling beer over our cameras - a signal in disguise to make memories by living, instead of recording the moment. 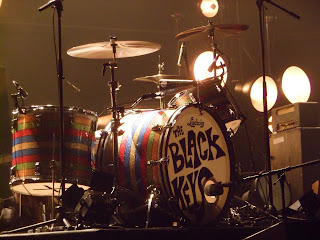 Thunder drums by Patrick Carney, (un)traditionally sexy vocals by Dan Auerbach and excellent extra accompaniment at the back - but the duo did equally brilliantly when left on its' own. I still have to think of a bad moment, but Little Black Submarines (from their latest El Camino) was definitely a highlight. Their Twilight: Eclipse contribution Chop and Change was also there, as was their XFM hit Lonely Boy. But luckily, in this case, I had already built great faith in and history with the band to satisfyingly enjoy trends. With the second hit, in particular, they celebrated El Camino's gold status in the UK, a kind of success I'm afraid will eventually alter and suppress their psychotic blues energy. I can't also tell whether their no-beards-and-long-hair-attached, a-la-Kings-of-Leon evolution will from now on go hand-in-hand with their acquired celebrity status.
For the time being, they remain in pristine, authentic rock condition. They didn't grace us with the above-mentioned Black Snake Moan favourite, but while the lights were on they were top notch (the lights, the band, the whole lot).
On our way out the thickening snow provided a magical cinematic scenery.
What a gig. What a band!